Shares of Lululemon Athletica inc. (NASDAQ:LULU) took a hit recently when news broke that a recall of the upscale apparel company’s popular yoga pants due to a quality issue would effect 17% of its inventory. Shares dropped about 11% from $70 to a low of $62 a few days later, and the company has stated that its guidance for first-quarter sales has been lowered to $343 million from $355 million previously, and that same-store sales were expected to increase 5-8% instead of 11% as previously estimated.

Lululemon Athletica inc. (NASDAQ:LULU) has been growing extremely quickly, more than quadrupling annual revenue since 2008 while growing both gross margin and operating margin. The company sells high-end athletic gear and is most well known for its popular yoga pants which sell for $90 and up. Along with the revenue growth the company’s stock has exploded since the financial crisis, rising more than 20 times its low. 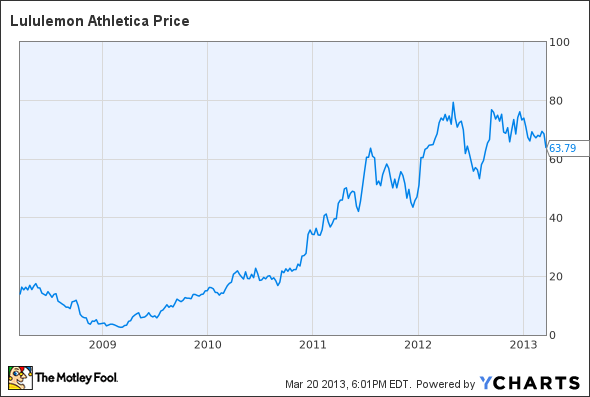 This pants problem is clearly a short-term issue, so the reaction seems far stronger than it should be. But maybe it has something to do with the extremely lofty valuation of the stock. The stock trades at about 39 times the trailing earnings per share (EPS) of $1.61 and about 35 times the average analyst estimate for full-year earnings of $1.84. Analysts expect sales to be $1.37 billion for the full year, up from $1 billion in 2011.

How long can this kind of growth last? How many people are willing to spend $100 on a pair of workout pants? The market for the kinds of products which Lululemon Athletica inc. (NASDAQ:LULU) sells is fairly small; a $60 tank top does not have mass market appeal. A good company to compare Lululemon to might be Coach, Inc. (NYSE:COH), the seller of high-priced handbags. Both companies sell expensive fashion products which compete with lower-priced alternatives, and conveniently Coach was about the same size in terms of revenue and profit in 2003 as Lululemon is today.

During that time, Coach managed to improve both its gross margin and its operating margin. The stock has gone up five-fold since then, hitting a high in 2011 which was nearly eight times higher than its price in 2003.

You could buy a share of Coach during 2003 for about $10 per share, which was 25 times the EPS. The PEG ratio, using the real EPS growth, was a bit under one, suggesting growth at a reasonable price. If you bought Coach for $10 per share exactly 10 years ago, you realized a 17.5% annualized gain on the stock, even after shares dropped from their highs in 2011.

Lululemon Athletica inc. (NASDAQ:LULU) trades at 35 times estimated earnings for 2012, which puts the PEG ratio, assuming Coach-like EPS growth, at 1.27. Coach, Inc. (NYSE:COH) over the last decade seems to be a reasonable proxy for Lululemon over the next decade, but Coach was trading at a significantly lower valuation 10 years ago than Lululemon is today. If you had bought Coach shares 10 years ago at 35 times earnings instead of 25, a share price of $14, you’re annualized return would have been just 13.6% instead of 17.5%. Still exceptional, but quite a bit lower.