Is LivaNova PLC (NASDAQ:LIVN) a good place to invest some of your money right now? We can gain invaluable insight to help us answer that question by studying the investment trends of top investors, who employ world-class Ivy League graduates, who are given immense resources and industry contacts to put their financial expertise to work. The top picks of these firms have historically outperformed the market when we account for known risk factors, making them very valuable investment ideas.

Is LivaNova PLC (NASDAQ:LIVN) a sound investment now? Hedge funds are getting less optimistic. The number of bullish hedge fund positions dropped by 4 recently. Our calculations also showed that LIVN isn’t among the 30 most popular stocks among hedge funds (view the video below).

In today’s marketplace there are numerous methods stock market investors put to use to analyze publicly traded companies. A pair of the most underrated methods are hedge fund and insider trading signals. We have shown that, historically, those who follow the best picks of the best investment managers can outclass the market by a very impressive margin (see the details here).

At the end of the second quarter, a total of 16 of the hedge funds tracked by Insider Monkey were long this stock, a change of -20% from the previous quarter. Below, you can check out the change in hedge fund sentiment towards LIVN over the last 16 quarters. So, let’s review which hedge funds were among the top holders of the stock and which hedge funds were making big moves. 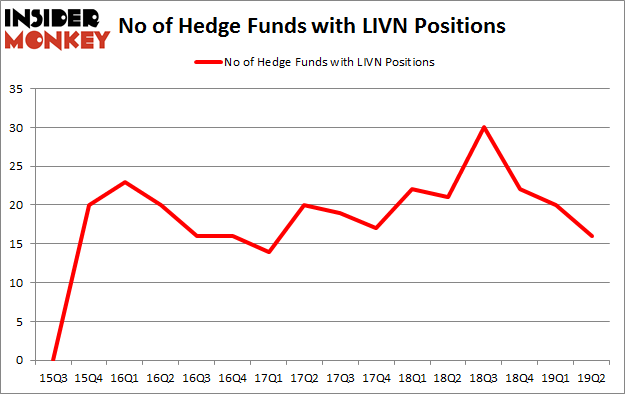 More specifically, Citadel Investment Group was the largest shareholder of LivaNova PLC (NASDAQ:LIVN), with a stake worth $41.1 million reported as of the end of March. Trailing Citadel Investment Group was Redmile Group, which amassed a stake valued at $30.5 million. D E Shaw, AQR Capital Management, and Point72 Asset Management were also very fond of the stock, giving the stock large weights in their portfolios.

Because LivaNova PLC (NASDAQ:LIVN) has faced falling interest from hedge fund managers, it’s safe to say that there were a few hedgies who were dropping their full holdings heading into Q3. It’s worth mentioning that Renaissance Technologies sold off the biggest position of all the hedgies watched by Insider Monkey, worth an estimated $35.8 million in call options. Israel Englander’s fund, Millennium Management, also dropped its call options, about $7.3 million worth. These transactions are intriguing to say the least, as aggregate hedge fund interest was cut by 4 funds heading into Q3.

As you can see these stocks had an average of 23 hedge funds with bullish positions and the average amount invested in these stocks was $231 million. That figure was $183 million in LIVN’s case. The Goodyear Tire & Rubber Company (NASDAQ:GT) is the most popular stock in this table. On the other hand Methanex Corporation (NASDAQ:MEOH) is the least popular one with only 17 bullish hedge fund positions. Compared to these stocks LivaNova PLC (NASDAQ:LIVN) is even less popular than MEOH. Our calculations showed that top 20 most popular stocks among hedge funds returned 24.4% in 2019 through September 30th and outperformed the S&P 500 ETF (SPY) by 4 percentage points. A small number of hedge funds were also right about betting on LIVN, though not to the same extent, as the stock returned 2.5% during the third quarter and outperformed the market as well.

Hedge Funds Have Never Been This Bullish On Glacier Bancorp, Inc. (GBCI)
Monthly Newsletter Strategy
Download a free copy of our newsletter and see the details inside!
Hedge Fund Resource Center
Related News
Here’s What Hedge Funds Think About LivaNova PLC (LIVN) Were Hedge Funds Right About Fleeing LivaNova PLC (LIVN)? LivaNova PLC (LIVN)Hedge Funds Are Snapping Up Is LivaNova PLC (LIVN) a Good Stock to Buy? Highlights From Third Avenue’s Investor Letters 5 Healthcare Stocks Near the Top of Cheyne Capital’s Portfolio Short Interest is Tapering Off in These 5 Nasdaq Stocks 11 Largest Auto Insurance Companies In The US In 2019 10 Poorest Cities in America in 2019 8 Lowest Tar and Nicotine Cigarette Brands in 2019
Billionaire Hedge Funds