LinkedIn Corp (LNKD): Should You Buy?

Shares of job search network LinkedIn Corp (NYSE:LNKD) recently plunged, after the Mountain View, Calif.-based company followed up strong first quarter earnings with lackluster quarterly and full-year guidance. Ever since its May 2011 IPO, LinkedIn has been walking a fundamental tightrope. Bears have long claimed that the company’s sky-high valuations were unsustainable, while bulls believed that its growth potential justified the premium. Now the moment of truth has arrived – its LinkedIn Corp (NYSE:LNKD) still a rising balloon or just another popped bubble? 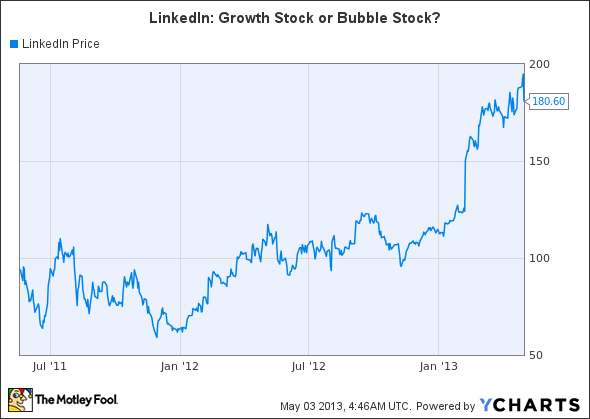 Although LinkedIn Corp (NYSE:LNKD)’s first quarter looked fine, its guidance for the current quarter and full year spooked investors. The company now expects second quarter revenue to come in between $342 million to $347 million, below the analyst forecast of $360 million.

For the full year, LinkedIn expects to generate between $1.43 billion to $1.46 billion in revenue, also lower than the $1.49 billion that analysts had expected. Full-year EBITDA, which is often used as a clearer gauge of profits for growing companies like LinkedIn Corp (NYSE:LNKD), is also expected to come in light at $330 million to $345 million, lower than the estimated $363 million.

LinkedIn is a victim of its own success. Considering that the stock has risen more than 80% over the past twelve months despite having a trailing P/E of over 1,000, fundamental gravity was bound to catch up sooner or later. The good news for LinkedIn Corp (NYSE:LNKD) is that unlike other recent social media stocks, such as Groupon Inc (NASDAQ:GRPN) and Yelp Inc (NYSE:YELP), the company is actually profitable. The bad news is that Wall Street still expects too much growth from the company.

LinkedIn generates revenue in two primary ways: recruiting services and advertising. LinkedIn’s recruiting service charges companies for a premium tracking product that helps them track job candidates, post job openings and organize applications. That segment contributed $184.3 million to its top line during the quarter – 57% of the company’s total quarterly revenue, up from 53% a year earlier. This is a major advantage that LinkedIn has over other growing Internet competitors – its main source of revenue is not display advertising. In addition, 40% of LinkedIn’s revenue came from international markets.

Revenue from display ads rose 56% to $74.8 million, and sales of premium subscriptions for job seekers surged 73% to $65.6 million. However, the company warned that its advertising growth would experience “more moderate growth” than its other business segments, since its new mobile news feed ads, similar to Facebook Inc (NASDAQ:FB)’s , were still in the testing phase. LinkedIn recently acquired popular social news aggregator Pulse to enhance its news content to keep users signed in for longer periods.

During the quarter, LinkedIn Corp (NYSE:LNKD)’s member base increased by 7.9% to 225 million, roughly double the size of the user base at the time of its IPO. By comparison, Twitter has 200 million active users, Google+ has 359 million, while Facebook Inc (NASDAQ:FB) has 1.1 billion.

All of these positive numbers were driven by a growing job market both at home and abroad, and an increasing rate of adoption by students, who have grown accustomed to the constantly connected social-networking world of Facebook Inc (NASDAQ:FB) and Twitter.