LinkedIn Corp (LNKD): Should You Buy?

But all these positive catalysts were not enough for Mr. Market, who was expecting even higher growth on par, percentage wise, with last year’s feverish growth. Therefore, shares plunged 10% after hours on May 3.

Unlike other Internet startups, LinkedIn has a wide defensive moat. Companies such as Groupon Inc (NASDAQ:GRPN), Yelp or Internet-radio station Pandora Media Inc (NYSE:P) can easily be swept away by larger companies replicating the same experience.

Meanwhile, LinkedIn has the same advantage as Facebook – brand recognition and sector dominance. More people sign up for Facebook than Google+ for one simple reason: it’s where all their friends are. People register for LinkedIn for the same reason: that’s where they can find all the employers and job seekers. Right now, it would be nearly impossible to crack LinkedIn’s share of the social jobs market, so it would be a futile, money-wasting effort to even try.

LinkedIn, which was launched in 2003, made Monster’s top-down search format seem clumsy and outdated by comparison. The launch of Facebook in 2006 changed how Internet users interacted with each other, a trend that LinkedIn was tuned into but Monster Worldwide, Inc. (NYSE:MWW) was oblivious to. By 2010, metasearch site Indeed.com pushed Monster.com down to a distant third in most-visited U.S. job sites. What happened to Monster over the previous five years hasn’t been pretty. 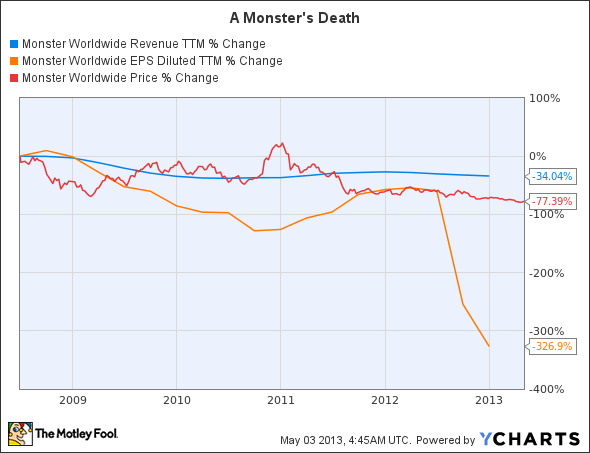 Although Monster recently reported earnings that topped pessimistic analyst estimates, the outlook is still dire for the company, with a possible sale as the only salvation for this fallen giant.

Despite the lack of immediate competition for LinkedIn, investors should watch for any unusual shifts in strategies from Facebook.

Facebook has long been considered a possible competitor, since it can easily add a job search service for employers to its site, considering that many users have already added detailed education and work histories in their profiles. The main barrier that Facebook faces is its perception as a casual social site. “Friending your boss on Facebook” is often considered a major faux pas.

However, if Facebook were to launch a separate service for professionals, tapping into the same shared data as its social site but blocking out private photos, videos or status updates, it could instantly create a social jobs network larger than LinkedIn.

I believe that LinkedIn is still a growth stock, and not a bubble about to burst. However, the stock might be due for a major pullback soon, and its overheated P/E ratio makes it an easy target for shorts to take down, so I think investors should wait to see how the next few weeks play out.

As long as LinkedIn can keep growing its user base, prioritize growth in recruitment services, and steadily grow its advertising business into a strong secondary revenue stream, the company will have a bright future ahead, and eventually its P/E ratio will reconcile with its price growth.

The article Is it Time to Buy LinkedIn? originally appeared on Fool.com and is written by Leo Sun.

3D Printing, What To Know: 3D Systems Corporation (DDD), Stratasys, Ltd. (SSYS...Electronic Arts Inc. (EA): Why This Quarter Is Key for It