It seems that the masses and most of the financial media hate hedge funds and what they do, but why is this hatred of hedge funds so prominent? At the end of the day, these asset management firms do not gamble the hard-earned money of the people who are on the edge of poverty. Truth be told, most hedge fund managers and other smaller players within this industry are very smart and skilled investors. Of course, they may also make wrong bets in some instances, but no one knows what the future holds and how market participants will react to the bountiful news that floods in each day. The Standard and Poor’s 500 Total Return Index ETFs returned 31.2% in 2019. Conversely, hedge funds’ top 20 large-cap stock picks generated a return of 41.3% during the same period, with the majority of these stock picks outperforming the broader market benchmark. Coincidence? It might happen to be so, but it is unlikely. Our research covering the last 18 years indicates that hedge funds’ consensus stock picks generate superior risk-adjusted returns. That’s why we believe it isn’t a waste of time to check out hedge fund sentiment before you invest in a stock like Kosmos Energy Ltd (NYSE:KOS).

Kosmos Energy Ltd (NYSE:KOS) shares haven’t seen a lot of action during the third quarter. Overall, hedge fund sentiment was unchanged. The stock was in 24 hedge funds’ portfolios at the end of September. At the end of this article we will also compare KOS to other stocks including Golub Capital BDC Inc (NASDAQ:GBDC), Triton International Limited (NYSE:TRTN), and Taubman Centers, Inc. (NYSE:TCO) to get a better sense of its popularity. 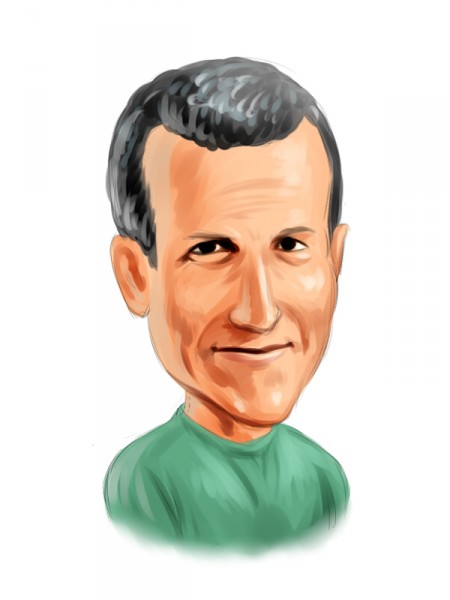 We leave no stone unturned when looking for the next great investment idea. For example Europe is set to become the world’s largest cannabis market, so we check out this European marijuana stock pitch. We read hedge fund investor letters and listen to stock pitches at hedge fund conferences. This December, we recommended Adams Energy as a one-way bet based on an under-the-radar fund manager’s investor letter and the stock is still extremely cheap despite already gaining 20 percent. With all of this in mind we’re going to take a glance at the fresh hedge fund action surrounding Kosmos Energy Ltd (NYSE:KOS).

Heading into the fourth quarter of 2019, a total of 24 of the hedge funds tracked by Insider Monkey held long positions in this stock, a change of 0% from the previous quarter. Below, you can check out the change in hedge fund sentiment towards KOS over the last 17 quarters. With hedgies’ sentiment swirling, there exists a few noteworthy hedge fund managers who were increasing their stakes meaningfully (or already accumulated large positions). 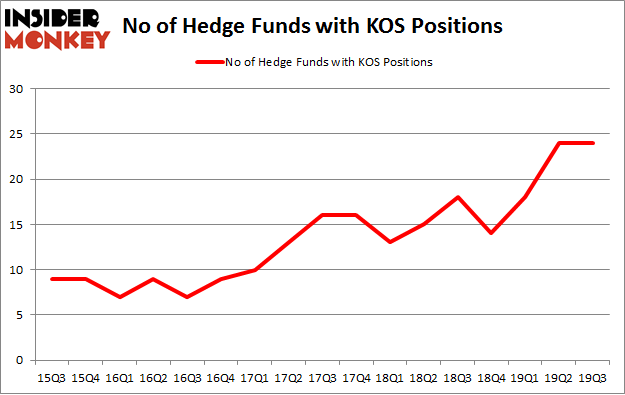 According to Insider Monkey’s hedge fund database, Point72 Asset Management, managed by Steve Cohen, holds the largest position in Kosmos Energy Ltd (NYSE:KOS). Point72 Asset Management has a $29.1 million position in the stock, comprising 0.2% of its 13F portfolio. Sitting at the No. 2 spot is Israel Englander of Millennium Management, with a $27.3 million position; the fund has less than 0.1%% of its 13F portfolio invested in the stock. Some other hedge funds and institutional investors that hold long positions include Matt Smith’s Deep Basin Capital, Cliff Asness’s AQR Capital Management and Ken Griffin’s Citadel Investment Group. In terms of the portfolio weights assigned to each position GeoSphere Capital Management allocated the biggest weight to Kosmos Energy Ltd (NYSE:KOS), around 6.57% of its 13F portfolio. Elm Ridge Capital is also relatively very bullish on the stock, earmarking 4.63 percent of its 13F equity portfolio to KOS.

Since Kosmos Energy Ltd (NYSE:KOS) has faced falling interest from hedge fund managers, it’s safe to say that there lies a certain “tier” of funds who sold off their positions entirely by the end of the third quarter. It’s worth mentioning that Stuart J. Zimmer’s Zimmer Partners sold off the largest position of all the hedgies followed by Insider Monkey, worth about $28.2 million in stock, and Dmitry Balyasny’s Balyasny Asset Management was right behind this move, as the fund sold off about $14.5 million worth. These moves are intriguing to say the least, as aggregate hedge fund interest stayed the same (this is a bearish signal in our experience).

As you can see these stocks had an average of 16 hedge funds with bullish positions and the average amount invested in these stocks was $85 million. That figure was $154 million in KOS’s case. Taubman Centers, Inc. (NYSE:TCO) is the most popular stock in this table. On the other hand Golub Capital BDC Inc (NASDAQ:GBDC) is the least popular one with only 11 bullish hedge fund positions. Compared to these stocks Kosmos Energy Ltd (NYSE:KOS) is more popular among hedge funds. Our calculations showed that top 20 most popular stocks among hedge funds returned 41.3% in 2019 and outperformed the S&P 500 ETF (SPY) by 10.1 percentage points. Hedge funds were also right about betting on KOS as the stock returned 44.2% in 2019 and outperformed the market by an even larger margin. Hedge funds were clearly right about piling into this stock relative to other stocks with similar market capitalizations.