Is KLX Energy Services Holdings, Inc. (NASDAQ:KLXE) a good bet right now? We like to analyze hedge fund sentiment before conducting days of in-depth research. We do so because hedge funds and other elite investors have numerous Ivy League graduates, expert network advisers, and supply chain tipsters working or consulting for them. There is not a shortage of news stories covering failed hedge fund investments and it is a fact that hedge funds’ picks don’t beat the market 100% of the time, but their consensus picks have historically done very well and have outperformed the market after adjusting for risk.

Is KLX Energy Services Holdings, Inc. (NASDAQ:KLXE) a buy here? The best stock pickers are in a bearish mood. The number of bullish hedge fund bets dropped by 2 lately. Our calculations also showed that KLXE isn’t among the 30 most popular stocks among hedge funds (see the video below). KLXE was in 8 hedge funds’ portfolios at the end of June. There were 10 hedge funds in our database with KLXE positions at the end of the previous quarter.

To the average investor there are a lot of gauges stock traders put to use to assess their holdings. A couple of the most underrated gauges are hedge fund and insider trading indicators. Our experts have shown that, historically, those who follow the top picks of the top money managers can outclass their index-focused peers by a healthy amount (see the details here). 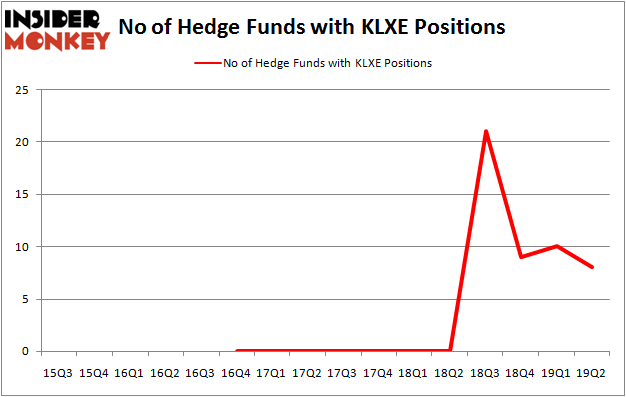 The largest stake in KLX Energy Services Holdings, Inc. (NASDAQ:KLXE) was held by GAMCO Investors, which reported holding $8.9 million worth of stock at the end of March. It was followed by Royce & Associates with a $7.8 million position. Other investors bullish on the company included Forest Hill Capital, Ancora Advisors, and Proxima Capital Management.

Since KLX Energy Services Holdings, Inc. (NASDAQ:KLXE) has witnessed declining sentiment from hedge fund managers, we can see that there was a specific group of funds that decided to sell off their full holdings in the second quarter. It’s worth mentioning that Benjamin A. Smith’s Laurion Capital Management sold off the biggest position of the “upper crust” of funds followed by Insider Monkey, worth an estimated $2.3 million in stock, and Peter Rathjens, Bruce Clarke and John Campbell’s Arrowstreet Capital was right behind this move, as the fund cut about $0.5 million worth. These moves are intriguing to say the least, as total hedge fund interest fell by 2 funds in the second quarter.

As you can see these stocks had an average of 13.25 hedge funds with bullish positions and the average amount invested in these stocks was $59 million. That figure was $29 million in KLXE’s case. SeaDrill Limited (NYSE:SDRL) is the most popular stock in this table. On the other hand Duluth Holdings Inc. (NASDAQ:DLTH) is the least popular one with only 10 bullish hedge fund positions. Compared to these stocks KLX Energy Services Holdings, Inc. (NASDAQ:KLXE) is even less popular than DLTH. Hedge funds dodged a bullet by taking a bearish stance towards KLXE. Our calculations showed that the top 20 most popular hedge fund stocks returned 24.4% in 2019 through September 30th and outperformed the S&P 500 ETF (SPY) by 4 percentage points. Unfortunately KLXE wasn’t nearly as popular as these 20 stocks (hedge fund sentiment was very bearish); KLXE investors were disappointed as the stock returned -57.7% during the third quarter and underperformed the market. If you are interested in investing in large cap stocks with huge upside potential, you should check out the top 20 most popular stocks among hedge funds as many of these stocks already outperformed the market so far in 2019.