Kinks in the Under Armour Inc (UA)?

The sports apparel company Under Armour Inc (NYSE:UA) has enjoyed considerable success in the United States and is rolling out new features to better compete with Lululemon Athletica (NASDAQ:LULU) and arch-rivals Nike (NYSE:NKE) and Adidas. But are Under Armour’s profound lack of a large international presence and marketing products for women kinks in its armor?

Under Armour is a strong growth stock and is the first sports apparel manufacturer to compete on par with Nike. Under Armour will hopefully make the right moves to gain a larger following abroad. But if it does not, then Nike and Adidas can exploit that fault.

Under Armour’s strengths at home

Under Armour Inc (NYSE:UA) has been able to crank out profits consistently and market a strong product line in the United States, and it’s reflected in the company’s stock price trend: 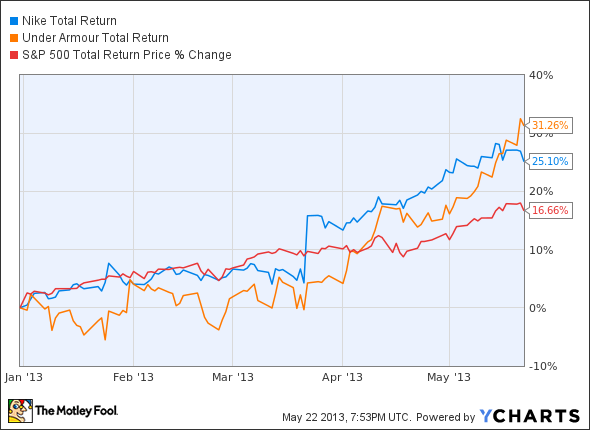 This fact is especially impressive considering the fierce competition from Nike and Adidas. In the first quarter of 2013, Under Armour saw revenue rise 23% to $472 million, and analysts are forecasting revenue to increase 22.3% in fiscal 2013 and grow 20.7% in fiscal 2014. Apparently, Under Armour is doing things right in the United States.

Under Armour Inc (NYSE:UA) has also recently rolled out products that directly take on Nike and yoga clothing manufacturer Lululemon. UnderArmour39 is an attempt to swipe market share from Nike’s  Nike+Fuelband. Under Armour is also working on expanding into manufacturing more products specifically tailored towards women, cutting into the appeal of Lululemon products.

Lululemon’s stock price is currently quite high. The company is widely known as a women’s apparel company and for the most part only a women’s apparel company. The see-through yoga pants debacle didn’t help Lululemon either. Industry stalwarts like Nike, Under Armour and Adidas threaten Lululemon’s future as they actively take on Lululemon in key categories.  Lululemon, although it has an almost cult following, will at best simply stand its current ground. Because of Lululemon’s niche market appeal among women, I believe that the company has modest growth prospects, but is a much riskier investment than Under Armour, Nike or Adidas.

Potential kinks in the Under Armour

Under Armour Inc (NYSE:UA) has held its own against rivals both big and small. Nike and Adidas, however, do hold one key to international markets that Under Armour does not have.

Like Nike, Adidas enjoys tremendous public exposure through endorsements from high-profile athletes and a robust marketing campaign. Strong demand for athletic gear in North America in recent years has helped lift profit margins for Under Armour, but this demand has also fueled the fires of Nike and Adidas. Adidas reported around $19 billion in revenue for 2012, which is far and beyond higher than Under Armour’s $1.83 billion and Lululemon’s $1 billion.

The most telling number in Under Armour’s flailing international strategy is that only 6% of Under Armour’s revenue was generated outside North America in 2012. Nike generates about 59% of its sales outside North America, while German-based Adidas garners 60% of its sales outside Europe. These are important factors driving the success of Nike and Adidas, both now and in the future. The good news is that Under Armour is seeking to expand internationally. Its success in that endeavor is another question.

Some analysts argue that Under Armour’s growth prospects are already priced into the stock and that Nike is a much more stable option for investors. This argument does hold some weight when looking at Nike’s fundamentals and rate of return. Consider this chart depicting the total return of Under Armour, Nike, and the S&P 500 since Under Armour went public in November 2005: 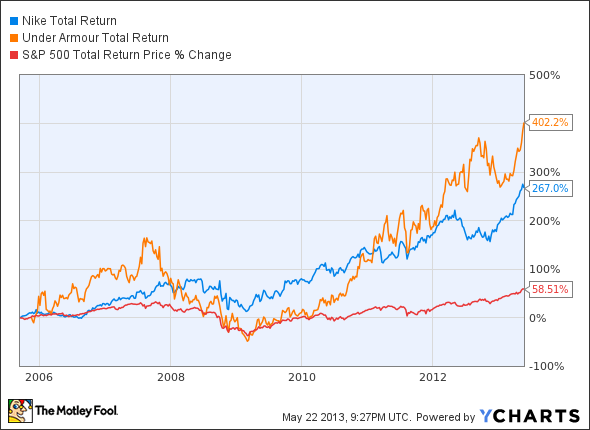