JPMorgan Chase & Co. (JPM): You, Yes You, Are Letting This Cloud Your Better Judgement

U.S. stocks settled at another record high — by the skin of their teeth — as the S&P 500 gained seven hundredths of a point. Meanwhile, the narrower, price-weighted Dow Jones Industrial Average fell 0.2%.

Follow-up: JPMorgan
Last week, I highlighted the fact that two highly respected value investors, including billionaire investor Warren Buffett, were giving JPMorgan Chase & Co. (NYSE:JPM) CEO Jamie Dimon their unvarnished support in the context of a shareholder vote on whether or not to strip Dimon of his role as the bank’s chairman. The other investor, Christopher Davis of Davis Funds, cited his track record of “exceptional performance.”

However, it appears that most individual investors do not share this appraisal — or they believe Dimon’s successor is at least equally talented. In response to a poll on the front page of Yahoo! Finance that asked, “As a shareholder, are you better or worse off if Jamie Dimon leaves JPMorgan Chase & Co. (NYSE:JPM)?” more than two-thirds answered that they would be better off or that it would make no difference (the split between the two answers was 24%/ 47%), with just 29% saying they would be worse off. Even as someone who has criticized Dimon in the past, I find those numbers very puzzling. They suggest that he and JPMorgan Chase & Co. have a serious perception problem with individual investors.

The last 12 months have not been kind to Dimon’s reputation: The London Whale incident tainted his image as the big bank CEO who walked on water. But while his reputation may have been inflated previously, it’s no use throwing the baby with the bathwater. Dimon has been and will, in all likelihood, continue to be a talented and effective executive. The following graph, which shows the performance of JPMorgan Chase & Co. (NYSE:JPM) shares since Dimon was named CEO, is instructive: 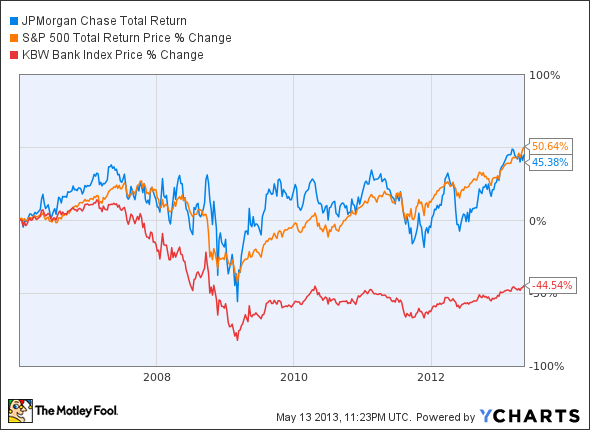 Over this period, JPMorgan Chase & Co. (NYSE:JPM) shares have roughly matched the total return of the S&P 500 and have absolutely smashed the KBW Bank Index (which doesn’t include dividends) — a very respectable result in a tough period for financials. Jamie Dimon’s got his work cut out for him right now, but investors who believe there are plenty of equal or better replacements for him are like Captain Ahab — they’re letting their fixation with a whale cloud their better judgement.

The article JPMorgan: Investors Need a Reality Check originally appeared on Fool.com and is written by Alex Dumortier, CFA.

Fool contributor Alex Dumortier, CFA has no position in any stocks mentioned. You can follow him on LinkedIn. The Motley Fool owns shares of JPMorgan Chase & Co. (NYSE:JPM).