Published on May 9, 2012 at 4:00 pm by Meena Krishnamsetty in Quantitative Investing

Yesterday I looked at James Montier’s 2006 paper The Little Note That Beats The Market and his view that investors would struggle to implement the Magic Formula strategy for behavioral reasons.

The Magic Formula is a logical value strategy, it works in backtest, and, most importantly, it seems to work in practice, as this chart from Formula Investing attests: 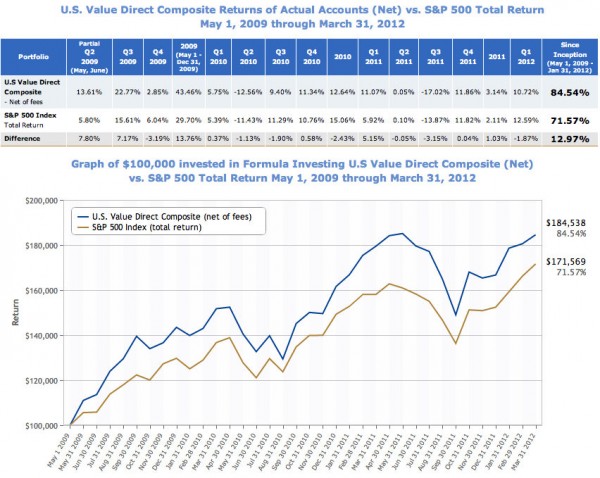 As Montier predicted, Joel Greenblatt has found that investors do in fact struggle to implement in the Magic Formula strategy in practice. In a great piece published earlier this year, Adding Your Two Cents May Cost You A Lot Over The Long-Term, Greenblatt examined the first two years of returns to Formula Investing’s US separately managed accounts:

Formula Investing provides two choices for retail clients to invest in U.S. stocks, either through what we call a “self-managed” account or through a “professionally managed” account. A self-managed account allows clients to make a number of their own choices about which top ranked stocks to buy or sell and when to make these trades. Professionally managed accounts follow a systematic process that buys and sells top ranked stocks with trades scheduled at predetermined intervals. During the two year period under study[1], both account types chose from the same list of top ranked stocks based on the formulas described in The Little Book that Beats the Market.

Greenblatt has conducted a great real-time behavioral investing experiment. Self-managed accounts have discretion over buy and sell decisions, while professionally managed accounts are automated. Both choose from the same list of stocks. So what happened?

[The] self-managed accounts, where clients could choose their own stocks from the pre-approved list and then follow (or not) our guidelines for trading the stocks at fixed intervals didn’t do too badly. A compilation of all self-managed accounts for the two year period showed a cumulative return of 59.4% after all expenses. Pretty darn good, right? Unfortunately, the S&P 500 during the same period was actually up 62.7%.

“Hmmm….that’s interesting”, you say (or I’ll say it for you, it works either way), “so how did the ‘professionally managed’ accounts do during the same period?” Well, a compilation of all the “professionally managed” accounts earned 84.1% after all expenses over the same two years, beating the “self managed” by almost 25% (and the S&P by well over 20%). For just a two year period, that’s a huge difference! It’s especially huge since both “self-managed” and “professionally managed” chose investments from the same list of stocks and supposedly followed the same basic game plan.

Let’s put it another way: on average the people who “self-managed” their accounts took a winning system and used their judgment to unintentionally eliminate all the outperformance and then some!

Just as Montier (and Greenblatt) predicted, investors struggle to implement the Magic Formula. Discretion over buy-and-sell decisions in aggregate can turn a model that generates a market beating return into a sub-par return. Extraordinary!

Greenblatt has to be admired for sharing this research with the world. Value investing is as misunderstood in the investment community at large as quantitative value investing is misunderstood in the value investing community. It takes a great deal of courage to point out the flaws (such as they are) in the implementation of a strategy, particularly when they are not known to those outside his firm. Given that Greenblatt has a great deal of money riding on the Magic Formula, he should be commended for conducting and sharing a superb bit of research.

I love his conclusion:

[The] best performing “self-managed” account didn’t actually do anything. What I mean is that after the initial account was opened, the client bought stocks from the list and never touched them again for the entire two year period. That strategy of doing NOTHING outperformed all other “self-managed” accounts. I don’t know if that’s good news, but I like the message it appears to send—simply, when it comes to long-term investing, doing “less” is often “more”. Well, good work if you can get it, anyway.

Note: This article is written by Greenbackd and originally published at Greenbackd.com.

Is Water the Next Commodity? Greenblatt, Eveillard have Positions