Looking for stocks with high upside potential? Just follow the big players within the hedge fund industry. Why should you do so? Let’s take a brief look at what statistics have to say about hedge funds’ stock picking abilities to illustrate. The Standard and Poor’s 500 Index returned approximately 5.7% in the 12 months ending October 26 (including dividend payments). Conversely, hedge funds’ 30 preferred S&P 500 stocks (as of June 2018) generated a return of 15.1% during the same 12-month period, with 53% of these stock picks outperforming the broader market benchmark. Coincidence? It might happen to be so, but it is unlikely. Our research covering the last 18 years indicates that hedge funds’ stock picks generate superior risk-adjusted returns. That’s why we believe it is wise to check hedge fund activity before you invest your time or your savings on a stock like WellCare Health Plans, Inc. (NYSE:WCG).

Hedge funds continue to hold WellCare Health Plans for the long-term, with little movement in hedge fund ownership over the past five quarters. 30 funds owned the stock on June 30, unchanged during Q2. Of particular note is the fact that more than 25% of those funds were managed or founded by billionaires, which landed the company on our list of the 25 Stocks Billionaires Are Piling On. Jim Simons’ Renaissance Technologies (1.39 million shares) and Ken Griffin’s Citadel Investment (510,693 shares) were among the biggest bulls. WCG recently entered into an agreement to buy Aetna Inc. (NYSE:AET)’s Medicare Part D prescription drug plan business, which that company is selling as part of is divesting ahead of its acquisition by CVS Health Corp (NYSE:CVS).

To most traders, hedge funds are perceived as unimportant, outdated financial tools of yesteryear. While there are over 8,000 funds in operation today, we look at the crème de la crème of this group, about 700 funds. These hedge fund managers have their hands on the lion’s share of the smart money’s total capital, and by tracking their unrivaled investments, Insider Monkey has brought to light numerous investment strategies that have historically outrun the market. Insider Monkey’s small-cap hedge fund strategy defeated the S&P 500 index by 12 percentage points per annum for a decade in their back tests (see the details here). 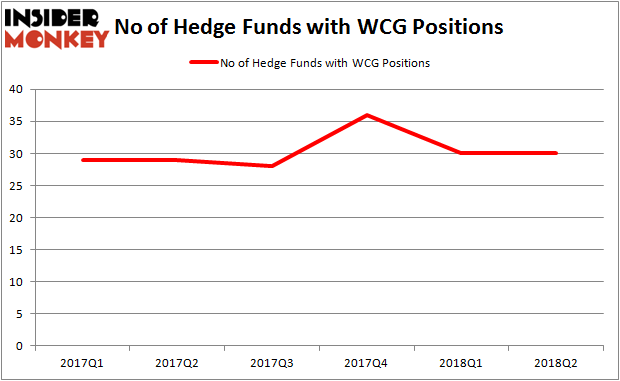 Jim Simon’s Renaissance Technologies held the most valuable stake in WellCare Health Plans, Inc. (NYSE:WCG), which was worth $343.1 million at the end of the second quarter. On the second spot was AQR Capital Management which had amassed $320.7 million worth of shares. Moreover, Bridger Management, Redmile Group, and Sivik Global Healthcare were also bullish on WellCare Health Plans, Inc. (NYSE:WCG), allocating a large percentage of their portfolios to this stock.

D E Shaw sold off the biggest position of the 700 funds tracked by Insider Monkey, valued at an estimated $7.5 million in stock, and Glenn Russell Dubin’s Highbridge Capital Management was right behind this move, as the fund dumped about $2.8 million worth of shares.

As you can see these stocks had an average of 18 hedge funds with bullish positions and the average amount invested in these stocks was $900 million. That figure was $1.55 billion in WCG’s case. Nielsen Hldg NV (NYSE:NLSN) is the most popular stock in this table. On the other hand, Cincinnati Financial is the least popular one with only 15 bullish hedge fund positions. Compared to these stocks WellCare Health Plans, Inc. (NYSE:WCG) is more popular among hedge funds. Considering that hedge funds and billionaires are fond of this stock in relation to its market cap peers, it may be a good idea to analyze it in detail and potentially include it in your portfolio.