Our extensive research has shown that imitating the smart money can generate significant returns for retail investors, which is why we track nearly 750 active prominent money managers and analyze their quarterly 13F filings. The stocks that are heavily bought by hedge funds historically outperformed the market, though there is no shortage of high profile failures like hedge funds’ 2018 losses in Facebook and Apple. Let’s take a closer look at what the funds we track think about James River Group Holdings Ltd (NASDAQ:JRVR) in this article.

James River Group Holdings Ltd (NASDAQ:JRVR) investors should be aware of a decrease in activity from the world’s largest hedge funds recently. JRVR was in 10 hedge funds’ portfolios at the end of June. There were 12 hedge funds in our database with JRVR holdings at the end of the previous quarter. Our calculations also showed that JRVR isn’t among the 30 most popular stocks among hedge funds (see the video below). 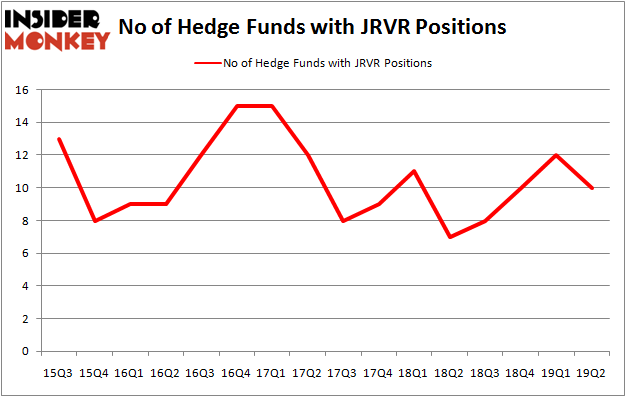 At the end of the second quarter, a total of 10 of the hedge funds tracked by Insider Monkey were bullish on this stock, a change of -17% from one quarter earlier. By comparison, 7 hedge funds held shares or bullish call options in JRVR a year ago. With hedge funds’ capital changing hands, there exists a few notable hedge fund managers who were increasing their stakes substantially (or already accumulated large positions).

When looking at the institutional investors followed by Insider Monkey, Renaissance Technologies has the most valuable position in James River Group Holdings Ltd (NASDAQ:JRVR), worth close to $26 million, corresponding to less than 0.1%% of its total 13F portfolio. Coming in second is Royce & Associates, led by Chuck Royce, holding a $5.3 million position; the fund has less than 0.1%% of its 13F portfolio invested in the stock. Some other hedge funds and institutional investors that hold long positions encompass Ken Griffin’s Citadel Investment Group, John Overdeck and David Siegel’s Two Sigma Advisors and David Harding’s Winton Capital Management.

Due to the fact that James River Group Holdings Ltd (NASDAQ:JRVR) has experienced a decline in interest from the smart money, it’s easy to see that there lies a certain “tier” of funds that decided to sell off their full holdings by the end of the second quarter. It’s worth mentioning that Gregg Moskowitz’s Interval Partners said goodbye to the biggest stake of the 750 funds followed by Insider Monkey, totaling close to $1 million in stock, and Paul Marshall and Ian Wace’s Marshall Wace LLP was right behind this move, as the fund said goodbye to about $1 million worth. These moves are intriguing to say the least, as aggregate hedge fund interest was cut by 2 funds by the end of the second quarter.

As you can see these stocks had an average of 11.25 hedge funds with bullish positions and the average amount invested in these stocks was $59 million. That figure was $40 million in JRVR’s case. MRC Global Inc (NYSE:MRC) is the most popular stock in this table. On the other hand PPDAI Group Inc. (NYSE:PPDF) is the least popular one with only 7 bullish hedge fund positions. James River Group Holdings Ltd (NASDAQ:JRVR) is not the least popular stock in this group but hedge fund interest is still below average. Our calculations showed that top 20 most popular stocks among hedge funds returned 24.4% in 2019 through September 30th and outperformed the S&P 500 ETF (SPY) by 4 percentage points. A small number of hedge funds were also right about betting on JRVR as the stock returned 9.9% during the same time frame and outperformed the market by an even larger margin.