It’s Time to Buy This Once Overvalued Stock

They say timing is everything, particularly when it comes to stock investment. I don’t disagree. That’s why I recommended caution with most of the major super-discount retail stocks back in April — it just wasn’t the right time to take on a new position in any of those stocks.

A lot can change in eight months though.

And it has at least for one of these discount retailers. Thanks to some more encouraging clarity on the earnings front combined with a big release of the technical tension its chart had brewed up, this stock is now a compelling buy.

Insanely overvalued in a recent past
It’s no real secret that dollar stores such as Family Dollar Stores, Inc. (NYSE:FDO), Dollar Tree, Inc. (NASDAQ:DLTR), and Dollar General Corp. (NYSE:DG) have been on a roll since the GreatRecession. Consumers are still feeling pinched and in need of real value for their dollars. Retailers that can give shoppers the most bang for their buck stand to win plenty of new business, and these three stores have sure done so.

This isn’t just a theoretical benefit either. As I reported in April, since 2008, Family Dollar has managed to grow its bottom line at an average annual pace of 23%. Dollar Tree’s income has grown an average of 31% annually since 2008. Dollar General’s bottom line growth has reached triple-digit proportions during the past three years, and even though it started to slow last fiscal year, that’s largely because it was running out of viable places to plant its flag.

Take a look at the chart below… 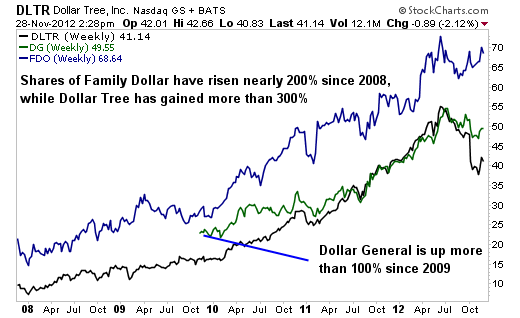 That growth is nothing less than phenomenal and investors were right to be impressed. Investors weren’t right, however, to pay an excessive price for that growth — even heavyweight investors like Warren Buffett, who took on a $48 million stake in Dollar General shortly before my April article.

At that time, Dollar Tree shares were sitting on top of a three-year rally that sent the stock soaring 300%. Family Dollar had rallied nearly 200% during the prior four years, while Dollar General shares had doubled in value since late 2009.

The size of the rallies themselves weren’t the problem with these stocks, however. The red flag was simply that these rallies had been a lot stronger than earnings growth, leaving all three stocks at price-to-earnings (P/E) ratios high enough to make even some technology and growth investors a little nervous. Dollar General was trading at 19.5 times trailing earnings in April, while Family Dollar and Dollar Tree were trading at 18.6 and 23.5 respectively.

Yes, many stocks have survived worse overvaluations, but those stocks weren’t from the world of discount retailing either. That’s why I specifically made the point that “the right time and price for an entry is probably going to require about a 25% correction from peak levels.”

And guess what finally happened since then…