The fourth quarter was a rough one for most investors, as fears of a rising interest rate environment in the U.S, a trade war with China, and a more or less stagnant Europe, weighed heavily on the minds of investors. Both the S&P 500 and Russell 2000 sank as a result, with the Russell 2000, which is composed of smaller companies, being hit especially hard. This was primarily due to hedge funds, which are big supporters of small-cap stocks, pulling some of their capital out of the volatile markets during this time. Let’s look at how this market volatility affected the sentiment of hedge funds towards Itau Unibanco Holding SA (NYSE:ITUB), and what that likely means for the prospects of the company and its stock.

Is Itau Unibanco Holding SA (NYSE:ITUB) a superb stock to buy now? Money managers are getting more bullish. The number of bullish hedge fund bets improved by 3 in recent months. Our calculations also showed that ITUB isn’t among the 30 most popular stocks among hedge funds. ITUB was in 18 hedge funds’ portfolios at the end of December. There were 15 hedge funds in our database with ITUB holdings at the end of the previous quarter.

If you’d ask most investors, hedge funds are perceived as worthless, old financial vehicles of the past. While there are greater than 8000 funds with their doors open at present, Our experts choose to focus on the moguls of this club, approximately 750 funds. Most estimates calculate that this group of people have their hands on bulk of all hedge funds’ total capital, and by shadowing their finest picks, Insider Monkey has identified a few investment strategies that have historically exceeded the broader indices. Insider Monkey’s flagship hedge fund strategy beat the S&P 500 index by nearly 5 percentage points per annum since its inception in May 2014 through early November 2018. We were able to generate large returns even by identifying short candidates. Our portfolio of short stocks lost 27.5% since February 2017 (through March 12th) even though the market was up nearly 25% during the same period. We just shared a list of 6 short targets in our latest quarterly update and they are already down an average of 6% in less than a month.

At the end of the fourth quarter, a total of 18 of the hedge funds tracked by Insider Monkey were bullish on this stock, a change of 20% from the second quarter of 2018. Below, you can check out the change in hedge fund sentiment towards ITUB over the last 14 quarters. With hedgies’ capital changing hands, there exists an “upper tier” of noteworthy hedge fund managers who were adding to their stakes substantially (or already accumulated large positions). 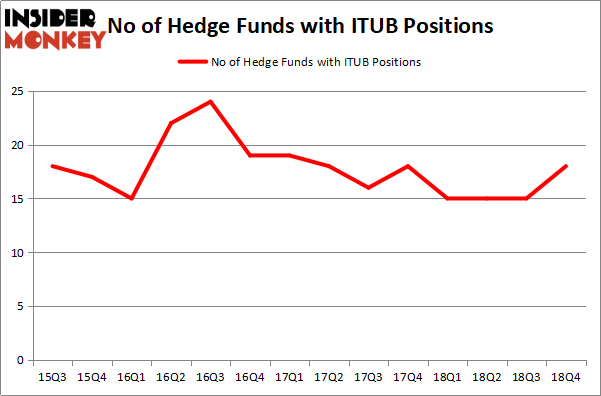 Consequently, specific money managers have been driving this bullishness. Orbis Investment Management, managed by William B. Gray, initiated the most valuable position in Itau Unibanco Holding SA (NYSE:ITUB). Orbis Investment Management had $135.6 million invested in the company at the end of the quarter. D. E. Shaw’s D E Shaw also made a $97.9 million investment in the stock during the quarter. The following funds were also among the new ITUB investors: Jim Simons’s Renaissance Technologies, Israel Englander’s Millennium Management, and Peter Rathjens, Bruce Clarke and John Campbell’s Arrowstreet Capital.

As you can see these stocks had an average of 34.5 hedge funds with bullish positions and the average amount invested in these stocks was $2487 million. That figure was $1033 million in ITUB’s case. Twenty-First Century Fox Inc (NASDAQ:FOX) is the most popular stock in this table. On the other hand Diageo plc (NYSE:DEO) is the least popular one with only 14 bullish hedge fund positions. Itau Unibanco Holding SA (NYSE:ITUB) is not the least popular stock in this group but hedge fund interest is still below average. This is a slightly negative signal and we’d rather spend our time researching stocks that hedge funds are piling on. Our calculations showed that top 15 most popular stocks among hedge funds returned 19.7% through March 15th and outperformed the S&P 500 ETF (SPY) by 6.6 percentage points. Unfortunately ITUB wasn’t in this group. Hedge funds that bet on ITUB were disappointed as the stock returned 10.3% and underperformed the market. If you are interested in investing in large cap stocks, you should check out the top 15 hedge fund stocks as 13 of these outperformed the market.

Should You Buy The Boeing Company (BA)?
Monthly Newsletter Strategy
Download a free copy of our newsletter and see the details inside!
Hedge Fund Resource Center
Related News
Here is What Hedge Funds Think About Itau Unibanco Holding SA (ITUB) Are Hedge Funds Right to Avoid Itau Unibanco Holding SA (ITUB)? Wondering What’s Happening in the Financial Markets Today? Take a Look at These 34 Stories! What’s Going On In The Finance World Today? Hedge Funds Are Pouring Into Itau Unibanco Holding SA (ADR) (ITUB) in Droves Top Performing CEOs in the World and What Top Performing Hedge Funds Think of Their Companies Five Stocks Billionaire Howard Marks Is Bullish On: Latin America Takes The Lead Ten of the Most Common Addictions 13 African Countries with the Largest White Population in 2018 6 Causes of Human Trafficking in Africa, India, and US
Billionaire Hedge Funds