Is YETI Holdings, Inc. (YETI) A Good Stock To Buy?

Before we spend days researching a stock idea we like to take a look at how hedge funds and billionaire investors recently traded that stock. Russell 2000 ETF (IWM) lagged the larger S&P 500 ETF (SPY) by more than 10 percentage points since the end of the third quarter of 2018. This means hedge funds that are allocating a higher percentage of their portfolio to small-cap stocks were probably underperforming the market. However, this also means that as small-cap stocks start to mean revert, these hedge funds will start delivering better returns than the S&P 500 Index funds. In this article, we will take a look at what hedge funds think about YETI Holdings, Inc. (NYSE:YETI).

YETI Holdings, Inc. (NYSE:YETI) was in 12 hedge funds’ portfolios at the end of the second quarter of 2019. YETI has experienced a decrease in enthusiasm from smart money in recent months. There were 14 hedge funds in our database with YETI positions at the end of the previous quarter. Our calculations also showed that YETI isn’t among the 30 most popular stocks among hedge funds (view video below).

In the financial world there are a large number of tools stock market investors put to use to evaluate publicly traded companies. A pair of the most useful tools are hedge fund and insider trading indicators. Our experts have shown that, historically, those who follow the best picks of the top investment managers can outclass the broader indices by a significant margin (see the details here).

At the end of the second quarter, a total of 12 of the hedge funds tracked by Insider Monkey were bullish on this stock, a change of -14% from the previous quarter. The graph below displays the number of hedge funds with bullish position in YETI over the last 16 quarters. With hedgies’ sentiment swirling, there exists an “upper tier” of notable hedge fund managers who were adding to their stakes considerably (or already accumulated large positions). 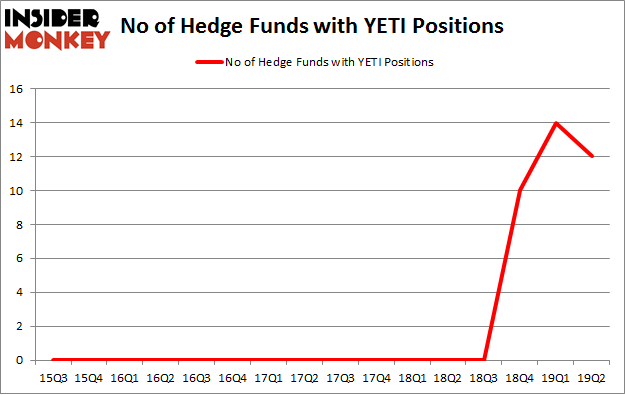 Of the funds tracked by Insider Monkey, Ken Griffin’s Citadel Investment Group has the number one position in YETI Holdings, Inc. (NYSE:YETI), worth close to $16.8 million, accounting for less than 0.1%% of its total 13F portfolio. The second largest stake is held by Oaktree Capital Management, led by Howard Marks, holding a $15.6 million position; the fund has 0.3% of its 13F portfolio invested in the stock. Remaining peers that hold long positions include Doug Gordon, Jon Hilsabeck and Don Jabro’s Shellback Capital, and Peter Rathjens, Bruce Clarke and John Campbell’s Arrowstreet Capital.

Judging by the fact that YETI Holdings, Inc. (NYSE:YETI) has witnessed falling interest from the aggregate hedge fund industry, logic holds that there were a few fund managers that slashed their positions entirely by the end of the second quarter. At the top of the heap, Frank Slattery’s Symmetry Peak Management said goodbye to the biggest position of the 750 funds tracked by Insider Monkey, valued at an estimated $1 million in stock, and Joel Greenblatt’s Gotham Asset Management was right behind this move, as the fund dumped about $0.7 million worth. These transactions are interesting, as total hedge fund interest was cut by 2 funds by the end of the second quarter.

As you can see these stocks had an average of 18.25 hedge funds with bullish positions and the average amount invested in these stocks was $374 million. That figure was $66 million in YETI’s case. Peabody Energy Corporation (NYSE:BTU) is the most popular stock in this table. On the other hand California Water Service Group (NYSE:CWT) is the least popular one with only 12 bullish hedge fund positions. Compared to these stocks YETI Holdings, Inc. (NYSE:YETI) is even less popular than CWT. Hedge funds dodged a bullet by taking a bearish stance towards YETI. Our calculations showed that the top 20 most popular hedge fund stocks returned 24.4% in 2019 through September 30th and outperformed the S&P 500 ETF (SPY) by 4 percentage points. Unfortunately YETI wasn’t nearly as popular as these 20 stocks (hedge fund sentiment was very bearish); YETI investors were disappointed as the stock returned -3.3% during the third quarter and underperformed the market. If you are interested in investing in large cap stocks with huge upside potential, you should check out the top 20 most popular stocks among hedge funds as many of these stocks already outperformed the market so far in 2019.

Hedge Funds Piled Into MongoDB (MDB) At The Wrong Time
Monthly Newsletter Strategy
Download a free copy of our newsletter and see the details inside!
Hedge Fund Resource Center
Related News
Hedge Funds Have Never Been This Bullish On YETI Holdings, Inc. (YETI) 11 Largest Auto Insurance Companies In The US In 2019 10 Poorest Cities in America in 2019 8 Lowest Tar and Nicotine Cigarette Brands in 2019
Billionaire Hedge Funds