Is Yelp Inc (YELP) A Good Stock To Buy?

As we already know from media reports and hedge fund investor letters, hedge funds delivered their best returns in a decade. Most investors who decided to stick with hedge funds after a rough 2018 recouped their losses by the end of the second quarter. We get to see hedge funds’ thoughts towards the market and individual stocks by aggregating their quarterly portfolio movements and reading their investor letters. In this article, we will particularly take a look at what hedge funds think about Yelp Inc (NYSE:YELP).

Yelp Inc (NYSE:YELP) investors should pay attention to a decrease in activity from the world’s largest hedge funds lately. YELP was in 27 hedge funds’ portfolios at the end of the second quarter of 2019. There were 33 hedge funds in our database with YELP holdings at the end of the previous quarter. Our calculations also showed that YELP isn’t among the 30 most popular stocks among hedge funds (view the video below).

In the financial world there are a large number of indicators shareholders use to analyze their holdings. Two of the most innovative indicators are hedge fund and insider trading moves. Our researchers have shown that, historically, those who follow the top picks of the best hedge fund managers can beat the market by a significant margin (see the details here).

Unlike former hedge manager, Dr. Steve Sjuggerud, who is convinced Dow will soar past 40000, our long-short investment strategy doesn’t rely on bull markets to deliver double digit returns. We only rely on hedge fund buy/sell signals. We’re going to go over the key hedge fund action regarding Yelp Inc (NYSE:YELP).

At Q2’s end, a total of 27 of the hedge funds tracked by Insider Monkey were bullish on this stock, a change of -18% from the previous quarter. Below, you can check out the change in hedge fund sentiment towards YELP over the last 16 quarters. With hedgies’ sentiment swirling, there exists an “upper tier” of key hedge fund managers who were adding to their holdings considerably (or already accumulated large positions). 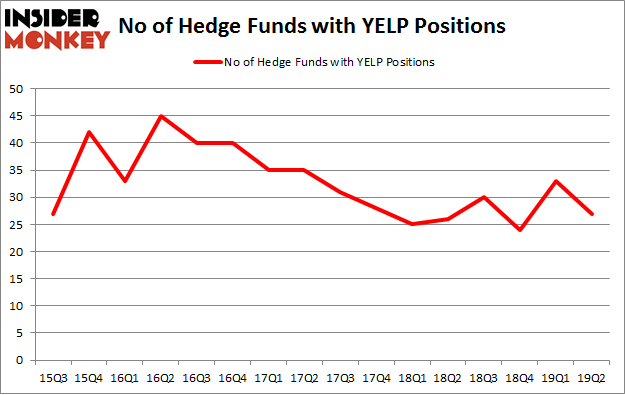 According to Insider Monkey’s hedge fund database, D. E. Shaw’s D E Shaw has the most valuable position in Yelp Inc (NYSE:YELP), worth close to $116.5 million, comprising 0.1% of its total 13F portfolio. The second most bullish fund manager is Fisher Asset Management, managed by Ken Fisher, which holds a $105.1 million position; the fund has 0.1% of its 13F portfolio invested in the stock. Remaining peers that are bullish contain Gil Simon’s SoMa Equity Partners, Edward Goodnow’s Goodnow Investment Group and Seth Wunder’s Black-and-White Capital.

Judging by the fact that Yelp Inc (NYSE:YELP) has witnessed declining sentiment from the entirety of the hedge funds we track, we can see that there were a few funds that decided to sell off their entire stakes heading into Q3. Intriguingly, Amish Mehta’s SQN Investors cut the largest investment of the 750 funds followed by Insider Monkey, valued at an estimated $101.8 million in stock. Adam Wolfberg and Steven Landry’s fund, EastBay Asset Management, also cut its stock, about $23.1 million worth. These moves are important to note, as total hedge fund interest dropped by 6 funds heading into Q3.

As you can see these stocks had an average of 16.5 hedge funds with bullish positions and the average amount invested in these stocks was $247 million. That figure was $471 million in YELP’s case. PTC Therapeutics, Inc. (NASDAQ:PTCT) is the most popular stock in this table. On the other hand Sunoco LP (NYSE:SUN) is the least popular one with only 6 bullish hedge fund positions. Yelp Inc (NYSE:YELP) is not the most popular stock in this group but hedge fund interest is still above average. This is a slightly positive signal but we’d rather spend our time researching stocks that hedge funds are piling on. Our calculations showed that top 20 most popular stocks among hedge funds returned 24.4% in 2019 through September 30th and outperformed the S&P 500 ETF (SPY) by 4 percentage points. Unfortunately YELP wasn’t nearly as popular as these 20 stocks and hedge funds that were betting on YELP were disappointed as the stock returned 1.7% during the third quarter and underperformed the market. If you are interested in investing in large cap stocks with huge upside potential, you should check out the top 20 most popular stocks among hedge funds as many of these stocks already outperformed the market so far this year.