Is Yandex NV (YNDX) A Good Stock To Buy?

As we already know from media reports and hedge fund investor letters, hedge funds delivered their best returns in a decade. Most investors who decided to stick with hedge funds after a rough 2018 recouped their losses by the end of the second quarter. We get to see hedge funds’ thoughts towards the market and individual stocks by aggregating their quarterly portfolio movements and reading their investor letters. In this article, we will particularly take a look at what hedge funds think about Yandex NV (NASDAQ:YNDX).

Hedge fund interest in Yandex NV (NASDAQ:YNDX) shares was flat at the end of last quarter. This is usually a negative indicator. At the end of this article we will also compare YNDX to other stocks including Conagra Brands, Inc. (NYSE:CAG), PagSeguro Digital Ltd. (NYSE:PAGS), and Hologic, Inc. (NASDAQ:HOLX) to get a better sense of its popularity. Our calculations also showed that Yandex isn’t among the 30 most popular stocks among hedge funds (see the video below). 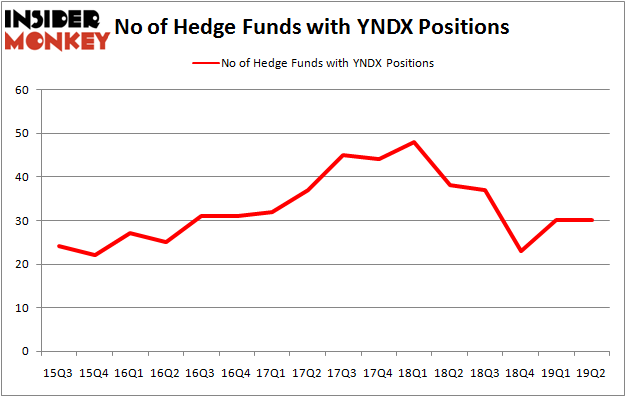 Unlike this former hedge fund manager who is convinced Dow will soar past 40000, our long-short investment strategy doesn’t rely on bull markets to deliver double digit returns. We only rely on hedge fund buy/sell signals. Let’s take a gander at the new hedge fund action encompassing Yandex NV (NASDAQ:YNDX).

At Q2’s end, a total of 30 of the hedge funds tracked by Insider Monkey were bullish on this stock, a change of 0% from the previous quarter. Below, you can check out the change in hedge fund sentiment towards YNDX over the last 16 quarters. With hedge funds’ positions undergoing their usual ebb and flow, there exists an “upper tier” of key hedge fund managers who were upping their stakes considerably (or already accumulated large positions).

The largest stake in Yandex NV (NASDAQ:YNDX) was held by Sachem Head Capital, which reported holding $137.9 million worth of stock at the end of March. It was followed by Cadian Capital with a $124.1 million position. Other investors bullish on the company included Light Street Capital, D E Shaw, and Lakewood Capital Management.

Due to the fact that Yandex NV (NASDAQ:YNDX) has experienced falling interest from the aggregate hedge fund industry, logic holds that there were a few hedgies who were dropping their entire stakes heading into Q3. At the top of the heap, Josh Resnick’s Jericho Capital Asset Management said goodbye to the biggest position of the 750 funds tracked by Insider Monkey, valued at about $44.2 million in stock. Steve Cohen’s fund, Point72 Asset Management, also cut its stock, about $18.4 million worth. These bearish behaviors are important to note, as total hedge fund interest stayed the same (this is a bearish signal in our experience).

Let’s check out hedge fund activity in other stocks – not necessarily in the same industry as Yandex NV (NASDAQ:YNDX) but similarly valued. We will take a look at Conagra Brands, Inc. (NYSE:CAG), PagSeguro Digital Ltd. (NYSE:PAGS), Hologic, Inc. (NASDAQ:HOLX), and Cna Financial Corporation (NYSE:CNA). All of these stocks’ market caps are similar to YNDX’s market cap.

As you can see these stocks had an average of 24.5 hedge funds with bullish positions and the average amount invested in these stocks was $714 million. That figure was $826 million in YNDX’s case. Hologic, Inc. (NASDAQ:HOLX) is the most popular stock in this table. On the other hand Cna Financial Corporation (NYSE:CNA) is the least popular one with only 12 bullish hedge fund positions. Yandex NV (NASDAQ:YNDX) is not the most popular stock in this group but hedge fund interest is still above average. This is a slightly positive signal but we’d rather spend our time researching stocks that hedge funds are piling on. Our calculations showed that top 20 most popular stocks among hedge funds returned 24.4% in 2019 through September 30th and outperformed the S&P 500 ETF (SPY) by 4 percentage points. Unfortunately YNDX wasn’t nearly as popular as these 20 stocks and hedge funds that were betting on YNDX were disappointed as the stock returned -7.9% during the third quarter and underperformed the market. If you are interested in investing in large cap stocks with huge upside potential, you should check out the top 20 most popular stocks among hedge funds as many of these stocks already outperformed the market so far this year.