Is Xperi Corporation (XPER) A Good Stock To Buy ?

After several tireless days we have finished crunching the numbers from nearly 750 13F filings issued by the elite hedge funds and other investment firms that we track at Insider Monkey, which disclosed those firms’ equity portfolios as of June 28. The results of that effort will be put on display in this article, as we share valuable insight into the smart money sentiment towards Xperi Corporation (NASDAQ:XPER).

Xperi Corporation (NASDAQ:XPER) was in 21 hedge funds’ portfolios at the end of the second quarter of 2019. XPER investors should be aware of a decrease in hedge fund sentiment in recent months. There were 23 hedge funds in our database with XPER positions at the end of the previous quarter. Our calculations also showed that XPER isn’t among the 30 most popular stocks among hedge funds (see the video below). 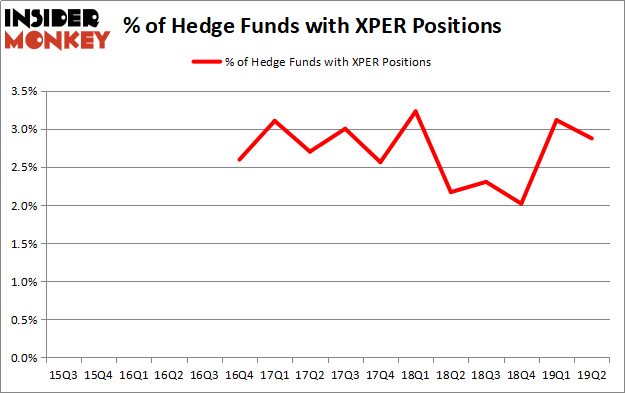 Of the funds tracked by Insider Monkey, Renaissance Technologies holds the largest position in Xperi Corporation (NASDAQ:XPER). Renaissance Technologies has a $34.8 million position in the stock, comprising less than 0.1%% of its 13F portfolio. The second most bullish fund manager is D E Shaw, managed by D. E. Shaw, which holds a $30.2 million position; less than 0.1%% of its 13F portfolio is allocated to the company. Some other members of the smart money that hold long positions consist of Peter Rathjens, Bruce Clarke and John Campbell’s Arrowstreet Capital, David Brown’s Hawk Ridge Management and Ken Griffin’s Citadel Investment Group.

Because Xperi Corporation (NASDAQ:XPER) has faced a decline in interest from hedge fund managers, it’s easy to see that there was a specific group of money managers who were dropping their full holdings heading into Q3. It’s worth mentioning that Douglas T. Granat’s Trigran Investments dumped the largest investment of all the hedgies tracked by Insider Monkey, totaling an estimated $8 million in stock, and Mike Vranos’s Ellington was right behind this move, as the fund sold off about $1.1 million worth. These transactions are interesting, as total hedge fund interest dropped by 2 funds heading into Q3.

As you can see these stocks had an average of 14.75 hedge funds with bullish positions and the average amount invested in these stocks was $172 million. That figure was $111 million in XPER’s case. CSW Industrials, Inc. (NASDAQ:CSWI) is the most popular stock in this table. On the other hand The Chefs Warehouse, Inc (NASDAQ:CHEF) is the least popular one with only 9 bullish hedge fund positions. Compared to these stocks Xperi Corporation (NASDAQ:XPER) is more popular among hedge funds. Our calculations showed that top 20 most popular stocks among hedge funds returned 24.4% in 2019 through September 30th and outperformed the S&P 500 ETF (SPY) by 4 percentage points. Unfortunately XPER wasn’t nearly as popular as these 20 stocks and hedge funds that were betting on XPER were disappointed as the stock returned 1.5% during the third quarter and underperformed the market. If you are interested in investing in large cap stocks with huge upside potential, you should check out the top 20 most popular stocks among hedge funds as many of these stocks already outperformed the market in Q3.