Is Weyerhaeuser Co. (WY) Going to Burn These Hedge Funds?

Weyerhaeuser Co. (NYSE:WY) shares haven’t seen a lot of action during the third quarter. Overall, hedge fund sentiment was unchanged. The stock was in 28 hedge funds’ portfolios at the end of the third quarter of 2019. The level and the change in hedge fund popularity aren’t the only variables you need to analyze to decipher hedge funds’ perspectives. A stock may witness a boost in popularity but it may still be less popular than similarly priced stocks. That’s why at the end of this article we will examine companies such as Synopsys, Inc. (NASDAQ:SNPS), Spotify Technology S.A. (NYSE:SPOT), and Fresenius Medical Care AG & Co. KGaA (NYSE:FMS) to gather more data points. Our calculations also showed that WY isn’t among the 30 most popular stocks among hedge funds (click for Q3 rankings and see the video below for Q2 rankings). There are currently two ETFs with significant allocations to WY: iShares Global Timber & Forestry ETF (NASDAQ:WOOD) and Invesco MSCI Global Timber ETF (NYSE:CUT).

To most shareholders, hedge funds are seen as unimportant, outdated investment tools of the past. While there are greater than 8000 funds with their doors open at the moment, Our researchers choose to focus on the upper echelon of this group, about 750 funds. These money managers preside over bulk of all hedge funds’ total asset base, and by paying attention to their best picks, Insider Monkey has brought to light numerous investment strategies that have historically beaten the market. Insider Monkey’s flagship short hedge fund strategy surpassed the S&P 500 short ETFs by around 20 percentage points per annum since its inception in May 2014. Our portfolio of short stocks lost 27.8% since February 2017 (through November 21st) even though the market was up more than 39% during the same period. We just shared a list of 7 short targets in our latest quarterly update .

Unlike the largest US hedge funds that are convinced Dow will soar past 40,000 or the world’s most bearish hedge fund that’s more convinced than ever that a crash is coming, our long-short investment strategy doesn’t rely on bull or bear markets to deliver double digit returns. We only rely on the best performing hedge funds‘ buy/sell signals. We’re going to go over the fresh hedge fund action encompassing Weyerhaeuser Co. (NYSE:WY).

Heading into the fourth quarter of 2019, a total of 28 of the hedge funds tracked by Insider Monkey were bullish on this stock, a change of 0% from one quarter earlier. By comparison, 35 hedge funds held shares or bullish call options in WY a year ago. With hedgies’ capital changing hands, there exists an “upper tier” of notable hedge fund managers who were adding to their stakes substantially (or already accumulated large positions). 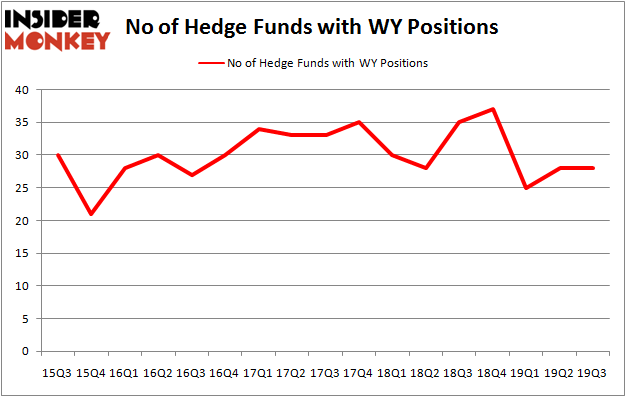 The largest stake in Weyerhaeuser Co. (NYSE:WY) was held by Third Avenue Management, which reported holding $88.6 million worth of stock at the end of September. It was followed by Citadel Investment Group with a $86.6 million position. Other investors bullish on the company included Renaissance Technologies, Samlyn Capital, and Adage Capital Management. In terms of the portfolio weights assigned to each position Third Avenue Management allocated the biggest weight to Weyerhaeuser Co. (NYSE:WY), around 8% of its portfolio. Bourgeon Capital is also relatively very bullish on the stock, earmarking 3.27 percent of its 13F equity portfolio to WY.

Seeing as Weyerhaeuser Co. (NYSE:WY) has faced a decline in interest from the entirety of the hedge funds we track, it’s safe to say that there was a specific group of fund managers who were dropping their entire stakes last quarter. It’s worth mentioning that David E. Shaw’s D E Shaw dropped the biggest investment of all the hedgies followed by Insider Monkey, valued at about $18.6 million in stock, and Greg Poole’s Echo Street Capital Management was right behind this move, as the fund dumped about $11.1 million worth. These transactions are intriguing to say the least, as total hedge fund interest stayed the same (this is a bearish signal in our experience).

As you can see these stocks had an average of 28 hedge funds with bullish positions and the average amount invested in these stocks was $1098 million. That figure was $452 million in WY’s case. Synopsys, Inc. (NASDAQ:SNPS) is the most popular stock in this table. On the other hand Fresenius Medical Care AG & Co. KGaA (NYSE:FMS) is the least popular one with only 5 bullish hedge fund positions. Weyerhaeuser Co. (NYSE:WY) is not the least popular stock in this group but hedge fund interest is still below average. Our calculations showed that top 20 most popular stocks among hedge funds returned 37.4% in 2019 through the end of November and outperformed the S&P 500 ETF (SPY) by 9.9 percentage points. A small number of hedge funds were also right about betting on WY, though not to the same extent, as the stock returned 6.5% during the first two months of the fourth quarter and outperformed the market.