The latest 13F reporting period has come and gone, and Insider Monkey is again at the forefront when it comes to making use of this gold mine of data. We have processed the filings of the more than 700 world-class investment firms that we track and now have access to the collective wisdom contained in these filings, which are based on their September 30 holdings, data that is available nowhere else. Should you consider Western Alliance Bancorporation (NYSE:WAL) for your portfolio? We’ll look to this invaluable collective wisdom for the answer.

Western Alliance Bancorporation (NYSE:WAL) shares haven’t seen a lot of action during the third quarter. Overall, hedge fund sentiment was unchanged. The stock was in 23 hedge funds’ portfolios at the end of September. The level and the change in hedge fund popularity aren’t the only variables you need to analyze to decipher hedge funds’ perspectives. A stock may witness a boost in popularity but it may still be less popular than similarly priced stocks. That’s why at the end of this article we will examine companies such as Teladoc Inc (NYSE:TDOC), People’s United Financial, Inc. (NASDAQ:PBCT), and Ternium S.A. (NYSE:TX) to gather more data points.

If you’d ask most shareholders, hedge funds are seen as slow, old financial vehicles of years past. While there are over 8,000 funds in operation at present, Our researchers hone in on the upper echelon of this club, about 700 funds. These investment experts administer the majority of the smart money’s total asset base, and by monitoring their unrivaled stock picks, Insider Monkey has found various investment strategies that have historically outperformed the market. Insider Monkey’s flagship hedge fund strategy outrun the S&P 500 index by 6 percentage points per annum since its inception in May 2014 through early November 2018. We were able to generate large returns even by identifying short candidates. Our portfolio of short stocks lost 24% since February 2017 (through December 3rd) even though the market was up nearly 23% during the same period. We just shared a list of 11 short targets in our latest quarterly update. 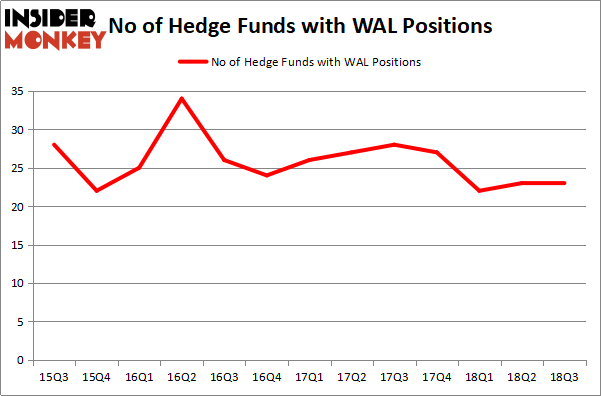 Among these funds, Citadel Investment Group held the most valuable stake in Western Alliance Bancorporation (NYSE:WAL), which was worth $95.1 million at the end of the third quarter. On the second spot was Millennium Management which amassed $84.9 million worth of shares. Moreover, Arrowstreet Capital, Adage Capital Management, and Two Sigma Advisors were also bullish on Western Alliance Bancorporation (NYSE:WAL), allocating a large percentage of their portfolios to this stock.

Due to the fact that Western Alliance Bancorporation (NYSE:WAL) has experienced bearish sentiment from the entirety of the hedge funds we track, we can see that there were a few fund managers who were dropping their positions entirely by the end of the third quarter. At the top of the heap, Clint Carlson’s Carlson Capital said goodbye to the biggest stake of all the hedgies watched by Insider Monkey, comprising an estimated $23.7 million in stock. Matthew Tewksbury’s fund, Stevens Capital Management, also cut its stock, about $4 million worth. These bearish behaviors are important to note, as aggregate hedge fund interest stayed the same (this is a bearish signal in our experience).

As you can see these stocks had an average of 18 hedge funds with bullish positions and the average amount invested in these stocks was $290 million. That figure was $371 million in WAL’s case. People’s United Financial, Inc. (NASDAQ:PBCT) is the most popular stock in this table. On the other hand Ternium S.A. (NYSE:TX) is the least popular one with only 14 bullish hedge fund positions. Compared to these stocks Western Alliance Bancorporation (NYSE:WAL) is more popular among hedge funds. Considering that hedge funds are fond of this stock in relation to its market cap peers, it may be a good idea to analyze it in detail and potentially include it in your portfolio.