Is Werner Enterprises, Inc. (WERN) A Good Stock To Buy?

Before we spend days researching a stock idea we’d like to take a look at how hedge funds and billionaire investors recently traded that stock. S&P 500 Index ETF (SPY) lost 13.5% in the fourth quarter. Seven out of 11 industry groups in the S&P 500 Index were down more than 20% from their 52-week highs at the trough of the stock market crash. The average return of a randomly picked stock in the index was even worse. This means you (or a monkey throwing a dart) have less than an even chance of beating the market by randomly picking a stock. On the other hand, the top 15 most popular S&P 500 stocks among hedge funds not only recouped their Q4 losses but also outperformed the index by more than 3 percentage points. In this article, we will take a look at what hedge funds think about Werner Enterprises, Inc. (NASDAQ:WERN).

Is Werner Enterprises, Inc. (NASDAQ:WERN) a marvelous stock to buy now? Money managers are becoming less confident. The number of long hedge fund bets retreated by 3 lately. Our calculations also showed that wern isn’t among the 30 most popular stocks among hedge funds.

To most investors, hedge funds are viewed as underperforming, outdated investment tools of yesteryear. While there are over 8000 funds in operation at present, Our researchers look at the leaders of this group, around 750 funds. These hedge fund managers handle the lion’s share of the hedge fund industry’s total asset base, and by tracking their matchless stock picks, Insider Monkey has discovered numerous investment strategies that have historically beaten Mr. Market. Insider Monkey’s flagship hedge fund strategy exceeded the S&P 500 index by nearly 5 percentage points per annum since its inception in May 2014 through early November 2018. We were able to generate large returns even by identifying short candidates. Our portfolio of short stocks lost 27.5% since February 2017 (through March 12th) even though the market was up nearly 25% during the same period. We just shared a list of 6 short targets in our latest quarterly update and they are already down an average of 6% in less than a month.

At the end of the fourth quarter, a total of 14 of the hedge funds tracked by Insider Monkey were long this stock, a change of -18% from the second quarter of 2018. Below, you can check out the change in hedge fund sentiment towards WERN over the last 14 quarters. So, let’s see which hedge funds were among the top holders of the stock and which hedge funds were making big moves. 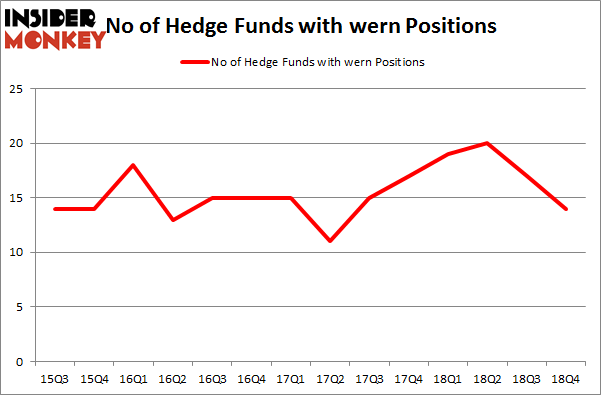 Among these funds, AQR Capital Management held the most valuable stake in Werner Enterprises, Inc. (NASDAQ:WERN), which was worth $29.7 million at the end of the third quarter. On the second spot was Millennium Management which amassed $19.6 million worth of shares. Moreover, Citadel Investment Group, Two Sigma Advisors, and Royce & Associates were also bullish on Werner Enterprises, Inc. (NASDAQ:WERN), allocating a large percentage of their portfolios to this stock.

Since Werner Enterprises, Inc. (NASDAQ:WERN) has faced bearish sentiment from hedge fund managers, logic holds that there exists a select few hedge funds that decided to sell off their positions entirely by the end of the third quarter. Interestingly, Dmitry Balyasny’s Balyasny Asset Management dropped the largest stake of the “upper crust” of funds tracked by Insider Monkey, totaling an estimated $0.6 million in stock, and Benjamin A. Smith’s Laurion Capital Management was right behind this move, as the fund sold off about $0.4 million worth. These transactions are important to note, as total hedge fund interest fell by 3 funds by the end of the third quarter.

As you can see these stocks had an average of 18 hedge funds with bullish positions and the average amount invested in these stocks was $148 million. That figure was $105 million in WERN’s case. Vonage Holdings Corp. (NYSE:VG) is the most popular stock in this table. On the other hand Apergy Corporation (NYSE:APY) is the least popular one with only 13 bullish hedge fund positions. Werner Enterprises, Inc. (NASDAQ:WERN) is not the least popular stock in this group but hedge fund interest is still below average. Our calculations showed that top 15 most popular stocks) among hedge funds returned 24.2% through April 22nd and outperformed the S&P 500 ETF (SPY) by more than 7 percentage points. A small number of hedge funds were also right about betting on WERN, though not to the same extent, as the stock returned 20% and outperformed the market as well.