Is Weibo Corp (WB) A Good Stock To Buy ?

With the first-quarter round of 13F filings behind us it is time to take a look at the stocks in which some of the best money managers in the world preferred to invest or sell heading into the second quarter. One of these stocks was Weibo Corp (NASDAQ:WB).

Weibo Corp (NASDAQ:WB) was in 16 hedge funds’ portfolios at the end of June. WB investors should be aware of an increase in hedge fund interest in recent months. There were 13 hedge funds in our database with WB positions at the end of the previous quarter. Our calculations also showed that WB isn’t among the 30 most popular stocks among hedge funds (view the video below). 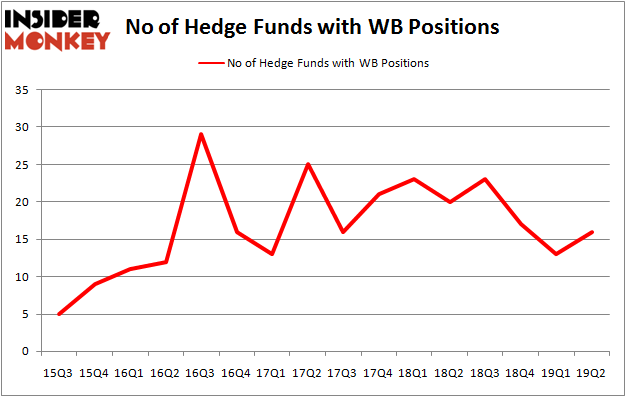 Unlike some fund managers who are betting on Dow reaching 40000 in a year, our long-short investment strategy doesn’t rely on bull markets to deliver double digit returns. We only rely on hedge fund buy/sell signals. Let’s take a gander at the recent hedge fund action regarding Weibo Corp (NASDAQ:WB).

At the end of the second quarter, a total of 16 of the hedge funds tracked by Insider Monkey held long positions in this stock, a change of 23% from one quarter earlier. Below, you can check out the change in hedge fund sentiment towards WB over the last 16 quarters. With the smart money’s positions undergoing their usual ebb and flow, there exists an “upper tier” of notable hedge fund managers who were increasing their holdings considerably (or already accumulated large positions).

As industrywide interest jumped, some big names were leading the bulls’ herd. Moore Global Investments, managed by Louis Bacon, initiated the most outsized position in Weibo Corp (NASDAQ:WB). Moore Global Investments had $8.7 million invested in the company at the end of the quarter. Anthony Bozza’s Lakewood Capital Management also made a $3.5 million investment in the stock during the quarter. The other funds with brand new WB positions are Gavin Saitowitz and Cisco J. del Valle’s Springbok Capital, John Overdeck and David Siegel’s Two Sigma Advisors, and Ray Dalio’s Bridgewater Associates.

As you can see these stocks had an average of 33.5 hedge funds with bullish positions and the average amount invested in these stocks was $637 million. That figure was $370 million in WB’s case. Zillow Group Inc (NASDAQ:Z) is the most popular stock in this table. On the other hand J.B. Hunt Transport Services, Inc. (NASDAQ:JBHT) is the least popular one with only 20 bullish hedge fund positions. Compared to these stocks Weibo Corp (NASDAQ:WB) is even less popular than JBHT. Our calculations showed that top 20 most popular stocks among hedge funds returned 24.4% in 2019 through September 30th and outperformed the S&P 500 ETF (SPY) by 4 percentage points. A small number of hedge funds were also right about betting on WB, though not to the same extent, as the stock returned 2.8% during the third quarter and outperformed the market as well.