Is Wayfair Inc (W) Going To Burn These Hedge Funds?

Insider Monkey has processed numerous 13F filings of hedge funds and successful value investors to create an extensive database of hedge fund holdings. The 13F filings show the hedge funds’ and successful investors’ positions as of the end of the second quarter. You can find write-ups about an individual hedge fund’s trades on numerous financial news websites. However, in this article we will take a look at their collective moves and analyze what the smart money thinks of Wayfair Inc (NYSE:W) based on that data.

Is Wayfair Inc (NYSE:W) a bargain? The best stock pickers are buying. The number of long hedge fund positions increased by 2 lately. Our calculations also showed that W isn’t among the 30 most popular stocks among hedge funds (view the video below). W was in 32 hedge funds’ portfolios at the end of June. There were 30 hedge funds in our database with W positions at the end of the previous quarter. 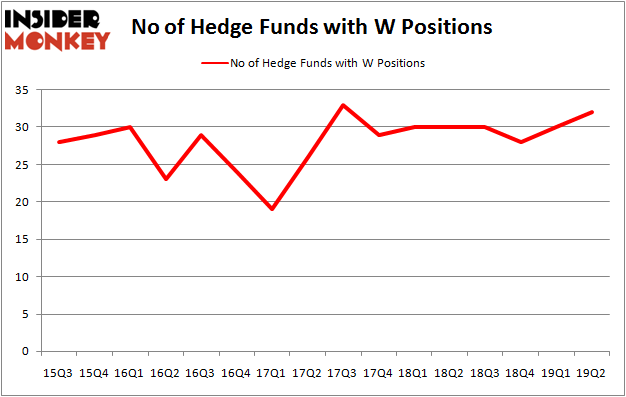 Unlike some fund managers who are betting on Dow reaching 40000 in a year, our long-short investment strategy doesn’t rely on bull markets to deliver double digit returns. We only rely on hedge fund buy/sell signals. Let’s take a peek at the fresh hedge fund action regarding Wayfair Inc (NYSE:W).

Among these funds, Spruce House Investment Management held the most valuable stake in Wayfair Inc (NYSE:W), which was worth $547.5 million at the end of the second quarter. On the second spot was Renaissance Technologies which amassed $360.6 million worth of shares. Moreover, D E Shaw, Bares Capital Management, and Whale Rock Capital Management were also bullish on Wayfair Inc (NYSE:W), allocating a large percentage of their portfolios to this stock.

As industrywide interest jumped, key hedge funds were leading the bulls’ herd. Samlyn Capital, managed by Robert Pohly, assembled the biggest call position in Wayfair Inc (NYSE:W). Samlyn Capital had $68.8 million invested in the company at the end of the quarter. Robert Pohly’s Samlyn Capital also made a $51.7 million investment in the stock during the quarter. The following funds were also among the new W investors: Wilmot B. Harkey and Daniel Mack’s Nantahala Capital Management, Leon Shaulov’s Maplelane Capital, and David Fiszel’s Honeycomb Asset Management.

As you can see these stocks had an average of 26.75 hedge funds with bullish positions and the average amount invested in these stocks was $1224 million. That figure was $2314 million in W’s case. Lincoln National Corporation (NYSE:LNC) is the most popular stock in this table. On the other hand IDEX Corporation (NYSE:IEX) is the least popular one with only 15 bullish hedge fund positions. Wayfair Inc (NYSE:W) is not the most popular stock in this group but hedge fund interest is still above average. This is a slightly positive signal but we’d rather spend our time researching stocks that hedge funds are piling on. Our calculations showed that top 20 most popular stocks among hedge funds returned 24.4% in 2019 through September 30th and outperformed the S&P 500 ETF (SPY) by 4 percentage points. Unfortunately W wasn’t nearly as popular as these 20 stocks and hedge funds that were betting on W were disappointed as the stock returned -23.2% during the third quarter and underperformed the market. If you are interested in investing in large cap stocks with huge upside potential, you should check out the top 20 most popular stocks among hedge funds as many of these stocks already outperformed the market so far this year.