Is Waterstone Financial, Inc. (WSBF) A Good Stock To Buy?

As we already know from media reports and hedge fund investor letters, many hedge funds lost money in fourth quarter, blaming macroeconomic conditions and unpredictable events that hit several sectors, with technology among them. Nevertheless, most investors decided to stick to their bullish theses and their long-term focus allows us to profit from the recent declines. In particular, let’s take a look at what hedge funds think about Waterstone Financial, Inc. (NASDAQ:WSBF) in this article.

Hedge fund interest in Waterstone Financial, Inc. (NASDAQ:WSBF) shares was flat at the end of last quarter. This is usually a negative indicator. At the end of this article we will also compare WSBF to other stocks including Puxin Limited (NYSE:NEW), Boot Barn Holdings Inc (NYSE:BOOT), and Petmed Express Inc (NASDAQ:PETS) to get a better sense of its popularity.

To most shareholders, hedge funds are viewed as underperforming, outdated financial vehicles of the past. While there are greater than 8000 funds with their doors open at present, Our experts choose to focus on the elite of this group, about 750 funds. These investment experts watch over the majority of all hedge funds’ total capital, and by keeping an eye on their highest performing investments, Insider Monkey has determined a few investment strategies that have historically outpaced Mr. Market. Insider Monkey’s flagship hedge fund strategy exceeded the S&P 500 index by nearly 5 percentage points per annum since its inception in May 2014 through early November 2018. We were able to generate large returns even by identifying short candidates. Our portfolio of short stocks lost 27.5% since February 2017 (through March 12th) even though the market was up nearly 25% during the same period. We just shared a list of 6 short targets in our latest quarterly update and they are already down an average of 6% in less than a month.

What does the smart money think about Waterstone Financial, Inc. (NASDAQ:WSBF)? 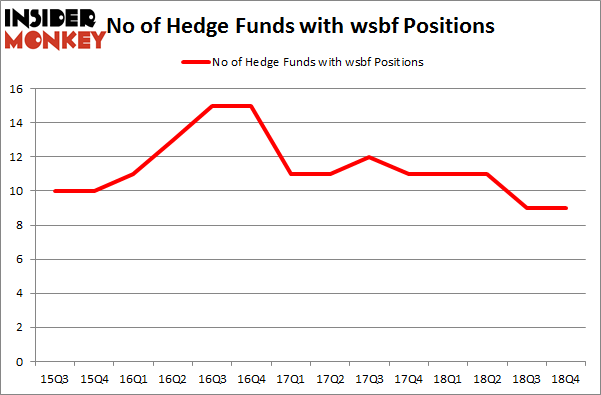 More specifically, Renaissance Technologies was the largest shareholder of Waterstone Financial, Inc. (NASDAQ:WSBF), with a stake worth $38 million reported as of the end of December. Trailing Renaissance Technologies was MFP Investors, which amassed a stake valued at $20.1 million. Seidman Investment Partnership, Driehaus Capital, and Prospector Partners were also very fond of the stock, giving the stock large weights in their portfolios.

Because Waterstone Financial, Inc. (NASDAQ:WSBF) has witnessed falling interest from the entirety of the hedge funds we track, it’s easy to see that there lies a certain “tier” of hedge funds who were dropping their positions entirely heading into Q3. Intriguingly, Ken Griffin’s Citadel Investment Group dropped the biggest stake of the 700 funds watched by Insider Monkey, valued at about $0.6 million in stock, and John Overdeck and David Siegel’s Two Sigma Advisors was right behind this move, as the fund dumped about $0.5 million worth. These bearish behaviors are intriguing to say the least, as aggregate hedge fund interest stayed the same (this is a bearish signal in our experience).

As you can see these stocks had an average of 12.75 hedge funds with bullish positions and the average amount invested in these stocks was $53 million. That figure was $79 million in WSBF’s case. Boot Barn Holdings Inc (NYSE:BOOT) is the most popular stock in this table. On the other hand Puxin Limited (NYSE:NEW) is the least popular one with only 4 bullish hedge fund positions. Waterstone Financial, Inc. (NASDAQ:WSBF) is not the least popular stock in this group but hedge fund interest is still below average. This is a slightly negative signal and we’d rather spend our time researching stocks that hedge funds are piling on. Our calculations showed that top 15 most popular stocks) among hedge funds returned 24.2% through April 22nd and outperformed the S&P 500 ETF (SPY) by more than 7 percentage points. Unfortunately WSBF wasn’t nearly as popular as these 15 stock (hedge fund sentiment was quite bearish); WSBF investors were disappointed as the stock returned 0.1% and underperformed the market. If you are interested in investing in large cap stocks with huge upside potential, you should check out the top 15 most popular stocks) among hedge funds as 13 of these stocks already outperformed the market this year.