Is Washington Federal Inc. (WAFD) A Good Stock To Buy ?

How do we determine whether Washington Federal Inc. (NASDAQ:WAFD) makes for a good investment at the moment? We analyze the sentiment of a select group of the very best investors in the world, who spend immense amounts of time and resources studying companies. They may not always be right (no one is), but data shows that their consensus long positions have historically outperformed the market when we adjust for known risk factors.

Is Washington Federal Inc. (NASDAQ:WAFD) worth your attention right now? Money managers are in a bearish mood. The number of bullish hedge fund bets went down by 1 lately. Our calculations also showed that WAFD isn’t among the 30 most popular stocks among hedge funds.

What does the smart money think about Washington Federal Inc. (NASDAQ:WAFD)? 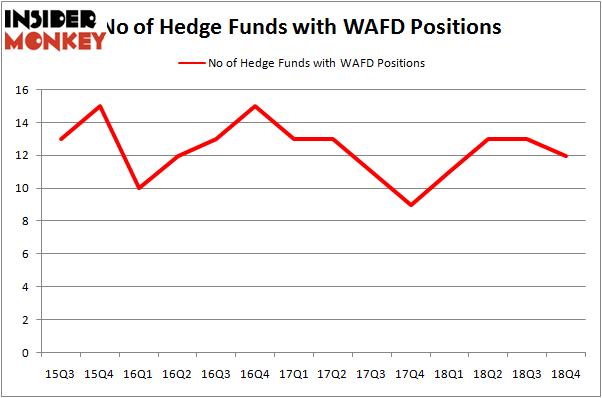 Among these funds, Renaissance Technologies held the most valuable stake in Washington Federal Inc. (NASDAQ:WAFD), which was worth $20.9 million at the end of the third quarter. On the second spot was Balyasny Asset Management which amassed $18.1 million worth of shares. Moreover, Arrowstreet Capital, Millennium Management, and GLG Partners were also bullish on Washington Federal Inc. (NASDAQ:WAFD), allocating a large percentage of their portfolios to this stock.

Because Washington Federal Inc. (NASDAQ:WAFD) has witnessed falling interest from the aggregate hedge fund industry, logic holds that there lies a certain “tier” of funds who were dropping their entire stakes heading into Q3. At the top of the heap, Ken Griffin’s Citadel Investment Group dropped the biggest stake of the 700 funds followed by Insider Monkey, worth about $4.5 million in stock. Matthew Tewksbury’s fund, Stevens Capital Management, also dumped its stock, about $0.4 million worth. These transactions are intriguing to say the least, as aggregate hedge fund interest fell by 1 funds heading into Q3.

Let’s now take a look at hedge fund activity in other stocks – not necessarily in the same industry as Washington Federal Inc. (NASDAQ:WAFD) but similarly valued. We will take a look at Eventbrite, Inc. (NYSE:EB), Beacon Roofing Supply, Inc. (NASDAQ:BECN), ProAssurance Corporation (NYSE:PRA), and National Vision Holdings, Inc. (NASDAQ:EYE). All of these stocks’ market caps are closest to WAFD’s market cap.

As you can see these stocks had an average of 14.25 hedge funds with bullish positions and the average amount invested in these stocks was $321 million. That figure was $77 million in WAFD’s case. Beacon Roofing Supply, Inc. (NASDAQ:BECN) is the most popular stock in this table. On the other hand Eventbrite, Inc. (NYSE:EB) is the least popular one with only 8 bullish hedge fund positions. Washington Federal Inc. (NASDAQ:WAFD) is not the least popular stock in this group but hedge fund interest is still below average. Our calculations showed that top 15 most popular stocks) among hedge funds returned 24.2% through April 22nd and outperformed the S&P 500 ETF (SPY) by more than 7 percentage points. A small number of hedge funds were also right about betting on WAFD, though not to the same extent, as the stock returned 22.4% and outperformed the market as well.