The latest 13F reporting period has come and gone, and Insider Monkey is again at the forefront when it comes to making use of this gold mine of data. We have processed the filings of the more than 700 world-class investment firms that we track and now have access to the collective wisdom contained in these filings, which are based on their September 30 holdings, data that is available nowhere else. Should you consider Walgreens Boots Alliance Inc (NASDAQ:WBA) for your portfolio? We’ll look to this invaluable collective wisdom for the answer.

Is Walgreens Boots Alliance Inc (NASDAQ:WBA) a buy here? Hedge funds are taking a bearish view. The number of bullish hedge fund bets were cut by 5 recently, and there were 34 hedge funds long the stock at the end of September. This wasn’t enough for the company to be considered as on of the 30 most popular stocks among ALL hedge funds.

While collecting further information about Walgreens Boots Alliance Inc (NASDAQ:WBA), we found RGA Investment Advisors Q3 2018 Investment Commentary, in which, this investment advisor talks about the company. We bring you that part of the report:

“Walgreen Boots Alliance (NASDAQ:WBA) entered the third quarter at its lowest share price in four years on the heels of Amazon (NASDAQ:AMZN) announcing a late second-quarter acquisition (on Walgreen’s earnings day no less). Amazon acquired PillPak, an online pharmacy with a differentiated offering.[7] We addressed the Amazon risk for Walgreen’s head-on in Elliot’s presentation at the Manual of Ideas Best Ideas Conference in January of his year.[8] While the market instantly focused on the risk, over the course of the quarter Walgreen’s shares recovered their lost ground and more. This offers an important lesson in sentiment.

While Walgreen’s sold off each time there were whispers of Amazon entering the pharmacy business, the materialization of an entry ended what has been a nearly two- year long running speculation of the e-commerce giant’s intents. In the speculative phase, prognosticators allowed their imaginations to run wild with upside scenarios for Amazon and harsh consequences for the incumbents in Walgreen’s and CVS, with timeframes for these predictions seemingly irrelevant. Upon actualization, however, the focus now must shift to execution. Before the PillPak acquisition, Walgreen’s the stock was fighting a perception battle with hypotheticals where price action was driven by narrative. Now Walgreen’s is fighting a competitive battle where market shares and margins will be the arbiters of success. On this front, Walgreen’s continues to gain share, though the company is sacrificing margin at the pharmacy to do so, while the front end continues to stabilize around a SKU rationalization and margin enhancement strategy.”

Continuing with our analysis, we are going to take a look at the recent hedge fund action regarding Walgreens Boots Alliance Inc (NASDAQ:WBA).

What does the smart money think about Walgreens Boots Alliance Inc (NASDAQ:WBA)?

At the end of the third quarter, a total of 34 of the hedge funds tracked by Insider Monkey were long this stock, a drop of 13% from the second quarter of 2018. By comparison, 47 hedge funds held shares or bullish call options in WBA heading into this year. With hedgies’ positions undergoing their usual ebb and flow, there exists an “upper tier” of key hedge fund managers who were boosting their holdings substantially (or already accumulated large positions). 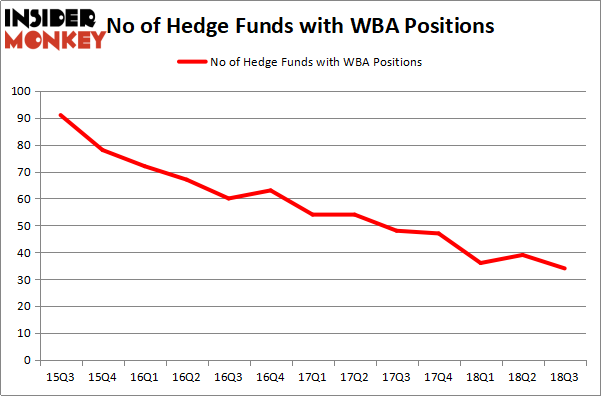 Among these funds, Glenview Capital held the most valuable stake in Walgreens Boots Alliance Inc (NASDAQ:WBA), which was worth $282.5 million at the end of the third quarter. On the second spot was Bill & Melinda Gates Foundation Trust which amassed $253.4 million worth of shares. Moreover, Kensico Capital, Soroban Capital Partners, and Markel Gayner Asset Management were also bullish on Walgreens Boots Alliance Inc (NASDAQ:WBA), allocating a large percentage of their portfolios to this stock.

Since Walgreens Boots Alliance Inc (NASDAQ:WBA) has witnessed declining sentiment from the entirety of the hedge funds we track, it’s safe to say that there lies a certain “tier” of funds that slashed their full holdings last quarter. Interestingly, Jonathon Jacobson’s Highfields Capital Management sold off the biggest investment of the 700 funds followed by Insider Monkey, valued at an estimated $45 million in stock, and James E. Flynn’s Deerfield Management was right behind this move, as the fund sold off about $31.9 million worth. These bearish behaviors are interesting, as total hedge fund interest fell by 5 funds last quarter.

As you can see these stocks had an average of 37 hedge funds with bullish positions and the average amount invested in these stocks was $2.66 billion. That figure was $1.33 billion in WBA’s case. Anthem Inc (NYSE:ANTM) is the most popular stock in this table. On the other hand Ambev SA (NYSE:ABEV) is the least popular one with only 14 bullish hedge fund positions. Walgreens Boots Alliance Inc (NASDAQ:WBA) is not the least popular stock in this group but hedge fund interest is still below average. This is a slightly negative signal and we’d rather spend our time researching stocks that hedge funds are piling on. In this regard ANTM might be a better candidate to consider a long position.