With the third-quarter round of 13F filings behind us it is time to take a look at the stocks in which some of the best money managers in the world preferred to invest or sell heading into the fourth quarter. One of these stocks was W.R. Grace & Co. (NYSE:GRA).

Is W.R. Grace & Co. (NYSE:GRA) worth your attention right now? Investors who are in the know are taking a bearish view. The number of long hedge fund positions dropped by 2 recently. Our calculations also showed that GRA isn’t among the 30 most popular stocks among hedge funds. GRA was in 37 hedge funds’ portfolios at the end of September. There were 39 hedge funds in our database with GRA positions at the end of the previous quarter.

What have hedge funds been doing with W.R. Grace & Co. (NYSE:GRA)?

Heading into the fourth quarter of 2018, a total of 37 of the hedge funds tracked by Insider Monkey were bullish on this stock, a change of -5% from the second quarter of 2018. By comparison, 33 hedge funds held shares or bullish call options in GRA heading into this year. With the smart money’s positions undergoing their usual ebb and flow, there exists a few notable hedge fund managers who were increasing their holdings significantly (or already accumulated large positions). 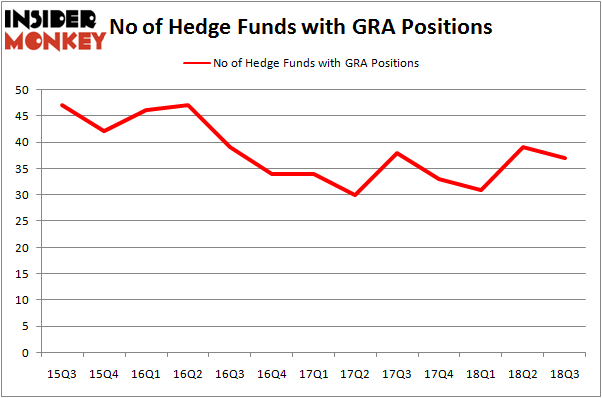 Due to the fact that W.R. Grace & Co. (NYSE:GRA) has witnessed declining sentiment from the entirety of the hedge funds we track, it’s easy to see that there was a specific group of hedgies who sold off their full holdings by the end of the third quarter. At the top of the heap, John Overdeck and David Siegel’s Two Sigma Advisors cut the largest position of the “upper crust” of funds watched by Insider Monkey, worth an estimated $37.9 million in call options. Dmitry Balyasny’s fund, Balyasny Asset Management, also dumped its call options, about $13.4 million worth. These transactions are important to note, as total hedge fund interest was cut by 2 funds by the end of the third quarter.

As you can see these stocks had an average of 22 hedge funds with bullish positions and the average amount invested in these stocks was $326 million. That figure was $1635 million in GRA’s case. Weight Watchers International, Inc. (NYSE:WTW) is the most popular stock in this table. On the other hand Shell Midstream Partners LP (NYSE:SHLX) is the least popular one with only 6 bullish hedge fund positions. Compared to these stocks W.R. Grace & Co. (NYSE:GRA) is more popular among hedge funds. Considering that hedge funds are fond of this stock in relation to its market cap peers, it may be a good idea to analyze it in detail and potentially include it in your portfolio.