Is DLB A Good Stock To Buy According To Hedge Funds?

The latest 13F reporting period has come and gone, and Insider Monkey is again at the forefront when it comes to making use of this gold mine of data. We at Insider Monkey have plowed through 817 13F filings that hedge funds and well-known value investors are required to file by the SEC. The 13F filings show the funds’ and investors’ portfolio positions as of September 30th, about a month before the elections. In this article we look at what those investors think of Dolby Laboratories, Inc. (NYSE:DLB).

Is DLB a good stock to buy? Dolby Laboratories, Inc. (NYSE:DLB) investors should be aware of an increase in hedge fund sentiment recently. Dolby Laboratories, Inc. (NYSE:DLB) was in 35 hedge funds’ portfolios at the end of the third quarter of 2020. The all time high for this statistic is 33. This means the bullish number of hedge fund positions in this stock currently sits at its all time high. There were 28 hedge funds in our database with DLB positions at the end of the second quarter. Our calculations also showed that DLB isn’t among the 30 most popular stocks among hedge funds (click for Q3 rankings and see the video for a quick look at the top 5 stocks).

Today there are a multitude of methods shareholders put to use to size up stocks. Two of the most innovative methods are hedge fund and insider trading sentiment. Our experts have shown that, historically, those who follow the top picks of the elite investment managers can outperform the S&P 500 by a very impressive amount (see the details here).

At Insider Monkey we leave no stone unturned when looking for the next great investment idea. For example, the House passed a landmark bill decriminalizing marijuana. So, we are checking out this under the radar cannabis stock right now. We go through lists like the 15 best blue chip stocks to buy to pick the best large-cap stocks to buy. Even though we recommend positions in only a tiny fraction of the companies we analyze, we check out as many stocks as we can. We read hedge fund investor letters and listen to stock pitches at hedge fund conferences. You can subscribe to our free daily newsletter on our website. Keeping this in mind we’re going to check out the key hedge fund action encompassing Dolby Laboratories, Inc. (NYSE:DLB).

Do Hedge Funds Think DLB Is A Good Stock To Buy Now?

At the end of the third quarter, a total of 35 of the hedge funds tracked by Insider Monkey were long this stock, a change of 25% from one quarter earlier. The graph below displays the number of hedge funds with bullish position in DLB over the last 21 quarters. With the smart money’s capital changing hands, there exists a select group of key hedge fund managers who were upping their stakes meaningfully (or already accumulated large positions). 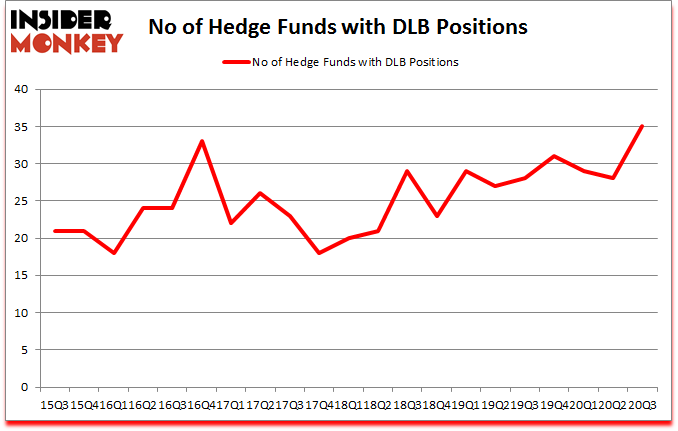 According to Insider Monkey’s hedge fund database, Gil Simon’s SoMa Equity Partners has the largest position in Dolby Laboratories, Inc. (NYSE:DLB), worth close to $116 million, amounting to 3.7% of its total 13F portfolio. Coming in second is Renaissance Technologies, holding a $99.2 million position; the fund has 0.1% of its 13F portfolio invested in the stock. Some other peers that hold long positions encompass John Smith Clark’s Southpoint Capital Advisors, Wilmot B. Harkey and Daniel Mack’s Nantahala Capital Management and Douglas T. Granat’s Trigran Investments. In terms of the portfolio weights assigned to each position Trigran Investments allocated the biggest weight to Dolby Laboratories, Inc. (NYSE:DLB), around 6.34% of its 13F portfolio. MFP Investors is also relatively very bullish on the stock, dishing out 5.98 percent of its 13F equity portfolio to DLB.

As you can see these stocks had an average of 30.6 hedge funds with bullish positions and the average amount invested in these stocks was $1083 million. That figure was $596 million in DLB’s case. ACADIA Pharmaceuticals Inc. (NASDAQ:ACAD) is the most popular stock in this table. On the other hand Casey’s General Stores, Inc. (NASDAQ:CASY) is the least popular one with only 21 bullish hedge fund positions. Dolby Laboratories, Inc. (NYSE:DLB) is not the most popular stock in this group but hedge fund interest is still above average. Our overall hedge fund sentiment score for DLB is 75. Stocks with higher number of hedge fund positions relative to other stocks as well as relative to their historical range receive a higher sentiment score. Our calculations showed that top 20 most popular stocks among hedge funds returned 41.3% in 2019 and outperformed the S&P 500 ETF (SPY) by 10 percentage points. These stocks gained 33.3% in 2020 through December 18th and still beat the market by 16.4 percentage points. Hedge funds were also right about betting on DLB as the stock returned 40.3% since the end of Q3 (through 12/18) and outperformed the market. Hedge funds were rewarded for their relative bullishness.

Is DLB A Good Investment Right Now?Is DLB A Good Stock To Buy?NYSE:DLBSentiment Score Between 70 and 80Yahoo Finance