Is Vertex Pharmaceuticals Incorporated (NASDAQ:VRTX) a good bet right now? We like to analyze hedge fund sentiment before doing days of in-depth research. We do so because hedge funds and other elite investors have numerous Ivy League graduates, expert network advisers, and supply chain tipsters working or consulting for them. There is not a shortage of news stories covering failed hedge fund investments and it is a fact that hedge funds’ picks don’t beat the market 100% of the time, but their consensus picks have historically done very well and have outperformed the market after adjusting for risk.

Vertex Pharmaceuticals Incorporated (NASDAQ:VRTX) shareholders have witnessed an increase in support from the world’s most elite money managers of late. VRTX was in 45 hedge funds’ portfolios at the end of the first quarter of 2019. There were 39 hedge funds in our database with VRTX holdings at the end of the previous quarter. Our calculations also showed that vrtx isn’t among the 30 most popular stocks among hedge funds.

What does the smart money think about Vertex Pharmaceuticals Incorporated (NASDAQ:VRTX)?

At the end of the first quarter, a total of 45 of the hedge funds tracked by Insider Monkey were bullish on this stock, a change of 15% from the fourth quarter of 2018. On the other hand, there were a total of 43 hedge funds with a bullish position in VRTX a year ago. With hedgies’ capital changing hands, there exists an “upper tier” of notable hedge fund managers who were upping their holdings meaningfully (or already accumulated large positions). 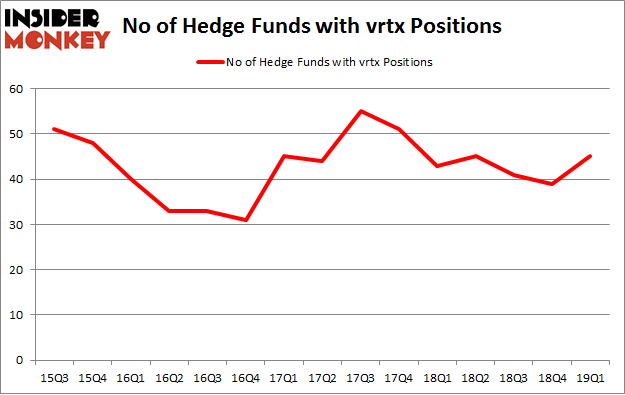 Of the funds tracked by Insider Monkey, Renaissance Technologies, managed by Jim Simons, holds the number one position in Vertex Pharmaceuticals Incorporated (NASDAQ:VRTX). Renaissance Technologies has a $934.2 million position in the stock, comprising 0.8% of its 13F portfolio. On Renaissance Technologies’s heels is John Overdeck and David Siegel of Two Sigma Advisors, with a $184.6 million position; the fund has 0.5% of its 13F portfolio invested in the stock. Remaining professional money managers that are bullish include D. E. Shaw’s D E Shaw, Samuel Isaly’s OrbiMed Advisors and Peter Rathjens, Bruce Clarke and John Campbell’s Arrowstreet Capital.

With a general bullishness amongst the heavyweights, some big names have been driving this bullishness. Chiron Investment Management, managed by Ryan Caldwell, established the most outsized position in Vertex Pharmaceuticals Incorporated (NASDAQ:VRTX). Chiron Investment Management had $25.2 million invested in the company at the end of the quarter. Michael Castor’s Sio Capital also initiated a $5.2 million position during the quarter. The other funds with new positions in the stock are Ray Dalio’s Bridgewater Associates, Sander Gerber’s Hudson Bay Capital Management, and Matthew Hulsizer’s PEAK6 Capital Management.

As you can see these stocks had an average of 30.5 hedge funds with bullish positions and the average amount invested in these stocks was $1205 million. That figure was $2286 million in VRTX’s case. Biogen Inc. (NASDAQ:BIIB) is the most popular stock in this table. On the other hand UBS Group AG (NYSE:UBS) is the least popular one with only 11 bullish hedge fund positions. Vertex Pharmaceuticals Incorporated (NASDAQ:VRTX) is not the most popular stock in this group but hedge fund interest is still above average. This is a slightly positive signal but we’d rather spend our time researching stocks that hedge funds are piling on. Our calculations showed that top 20 most popular stocks among hedge funds returned 1.9% in Q2 through May 30th and outperformed the S&P 500 ETF (SPY) by more than 3 percentage points. Unfortunately VRTX wasn’t nearly as popular as these 20 stocks and hedge funds that were betting on VRTX were disappointed as the stock returned -7.4% during the same period and underperformed the market. If you are interested in investing in large cap stocks with huge upside potential, you should check out the top 20 most popular stocks among hedge funds as 13 of these stocks already outperformed the market so far in Q2.