Handbag maker Vera Bradley, Inc. (NASDAQ:VRA) recently took a nasty plunge, after the company followed up its better-than-expected fourth quarter earnings with bleak guidance for the current quarter. Yet I believe that Vera’s recent drop represents a buying opportunity for patient long-term investors, and in this article I’ll outline Vera’s strengths, weaknesses and growth prospects in the coming year.

Fort Wayne, Indiana-based Vera Bradley, Inc. (NASDAQ:VRA) is primarily known for its iconic patterned bags. However, the company also sells other accessories and travel items, and more recently, baby products. Its products are available in a combination of 3,500 retail partners, which include 65 standalone Vera Bradley stores and 11 outlet locations. Although the company is primarily based in the United States, it also operates seven locations in Japan.

Some investors blame Vera Bradley for capping its own growth with a secondary offering in 2011, which diluted its shareholder base by approximately 15% – resulting in slower earnings per share growth.

The company’s full-price retail stores enjoyed higher store traffic, which contributed to a 24% increase in gross profits to $94.1 million. Gross margin also expanded by 150 basis points to 57.9%, which the company attributed to lower freight costs and better operational efficiency.

E-commerce sales grew by 23%, in line with the rapid online growth demonstrated by many of the company’s industry peers. During the full fiscal year, over 62 million people visited Vera Bradley’s website – a 45% increase over the prior year quarter. Vera Bradley’s social media presence continues to grow as well – it claimed 1.4 million Facebook fans over the fiscal year.

Meanwhile, indirect revenues – which are generated from third party retailers – rose 11%, which was primarily attributed to strong sales throughout its winter season, and the addition of several new Dillard’s, Inc. (NYSE:DDS) retail points.

This surge in SG&A expenses was caused by the launch of its new Baby segment, which began operating during the fourth quarter. 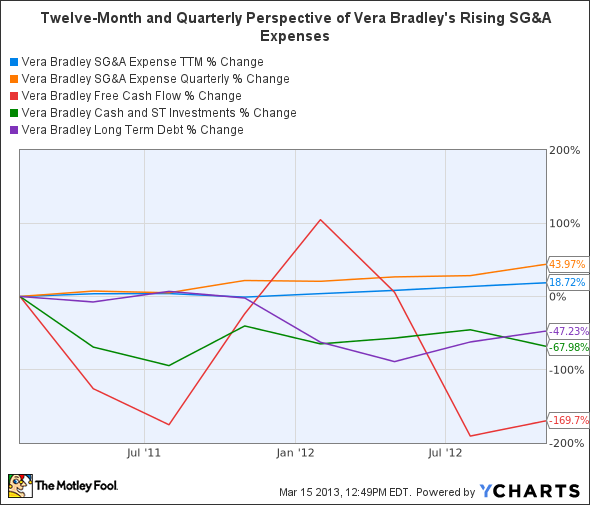 Investors are right to question the company’s expense levels, which are exacerbated by its 169.7% plunge in free cash flow and 67.98% slide in cash reserves. On a brighter note, long term debt declined by 47.23%.

Vera Bradley, Inc. (NASDAQ:VRA) finished 2013 with $9.6 million in cash, but is shouldering $15.1 million in total debt. Therefore, reducing debt and expenses – while boosting bottom line growth and free cash flow – should be a top priority.

However, the company plans to expand heavily in fiscal 2014 by opening 23 new stores, up from 20 new locations in 2013. If successful, the expansion will push Vera Bradley’s store count up to 99, allowing the company to edge closer to its stated long-term goal of opening 300 stores in North America.

Although Vera’s new stores are expected to generate stronger top line growth in the coming year, they might also weigh down its expenses and increase its outstanding debt.