Is Varonis Systems Inc (VRNS) A Good Stock To Buy?

Hedge Funds and other institutional investors have just completed filing their 13Fs with the Securities and Exchange Commission, revealing their equity portfolios as of the end of June. At Insider Monkey, we follow nearly 750 active hedge funds and notable investors and by analyzing their 13F filings, we can determine the stocks that they are collectively bullish on. One of their picks is Varonis Systems Inc (NASDAQ:VRNS), so let’s take a closer look at the sentiment that surrounds it in the current quarter.

Is Varonis Systems Inc (NASDAQ:VRNS) a buy, sell, or hold? The best stock pickers are getting less optimistic. The number of bullish hedge fund bets were cut by 1 lately. Our calculations also showed that VRNS isn’t among the 30 most popular stocks among hedge funds (see the video below). VRNS was in 24 hedge funds’ portfolios at the end of June. There were 25 hedge funds in our database with VRNS holdings at the end of the previous quarter.

At Q2’s end, a total of 24 of the hedge funds tracked by Insider Monkey were bullish on this stock, a change of -4% from the first quarter of 2019. On the other hand, there were a total of 26 hedge funds with a bullish position in VRNS a year ago. With hedge funds’ capital changing hands, there exists an “upper tier” of key hedge fund managers who were upping their stakes significantly (or already accumulated large positions). 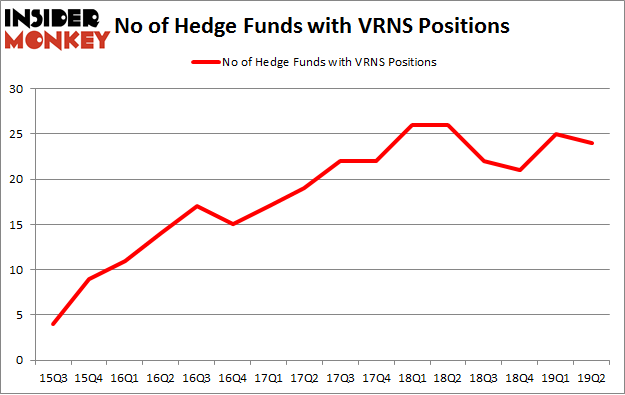 Among these funds, SoMa Equity Partners held the most valuable stake in Varonis Systems Inc (NASDAQ:VRNS), which was worth $65 million at the end of the second quarter. On the second spot was Cadian Capital which amassed $61.3 million worth of shares. Moreover, Atalan Capital, Holocene Advisors, and Tremblant Capital were also bullish on Varonis Systems Inc (NASDAQ:VRNS), allocating a large percentage of their portfolios to this stock.

Due to the fact that Varonis Systems Inc (NASDAQ:VRNS) has faced bearish sentiment from the aggregate hedge fund industry, logic holds that there lies a certain “tier” of fund managers who sold off their entire stakes in the second quarter. It’s worth mentioning that Peter Rathjens, Bruce Clarke and John Campbell’s Arrowstreet Capital cut the largest investment of the “upper crust” of funds followed by Insider Monkey, comprising about $6 million in call options, and Frank Slattery’s Symmetry Peak Management was right behind this move, as the fund sold off about $0.6 million worth. These transactions are interesting, as total hedge fund interest fell by 1 funds in the second quarter.