Is Valley National Bancorp (VLY) A Good Stock To Buy ?

A market correction in the fourth quarter, spurred by a number of global macroeconomic concerns and rising interest rates ended up having a negative impact on the markets and many hedge funds as a result. The stocks of smaller companies were especially hard hit during this time as investors fled to investments seen as being safer. This is evident in the fact that the Russell 2000 ETF underperformed the S&P 500 ETF by nearly 7 percentage points during the fourth quarter. We also received indications that hedge funds were trimming their positions amid the market volatility and uncertainty, and given their greater inclination towards smaller cap stocks than other investors, it follows that a stronger sell-off occurred in those stocks. Let’s study the hedge fund sentiment to see how those concerns affected their ownership of Valley National Bancorp (NASDAQ:VLY) during the quarter.

Hedge fund interest in Valley National Bancorp (NASDAQ:VLY) shares was flat at the end of last quarter. This is usually a negative indicator. The level and the change in hedge fund popularity aren’t the only variables you need to analyze to decipher hedge funds’ perspectives. A stock may witness a boost in popularity but it may still be less popular than similarly priced stocks. That’s why at the end of this article we will examine companies such as Qualys Inc (NASDAQ:QLYS), Sabra Health Care REIT Inc (NASDAQ:SBRA), and Newfield Exploration Co. (NYSE:NFX) to gather more data points.

What does the smart money think about Valley National Bancorp (NASDAQ:VLY)?

At Q4’s end, a total of 8 of the hedge funds tracked by Insider Monkey were long this stock, a change of 0% from the second quarter of 2018. On the other hand, there were a total of 10 hedge funds with a bullish position in VLY a year ago. With the smart money’s capital changing hands, there exists a few noteworthy hedge fund managers who were boosting their holdings considerably (or already accumulated large positions). 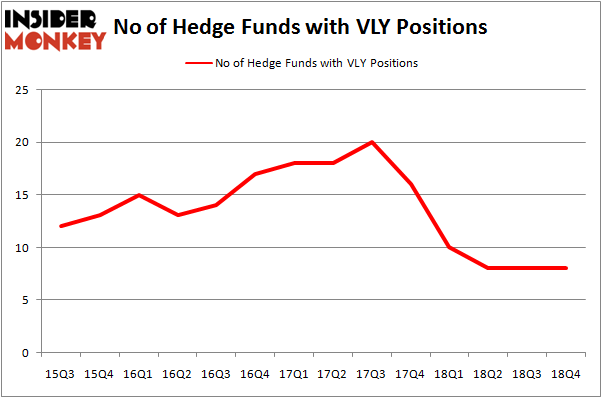 More specifically, Renaissance Technologies was the largest shareholder of Valley National Bancorp (NASDAQ:VLY), with a stake worth $8.8 million reported as of the end of September. Trailing Renaissance Technologies was Citadel Investment Group, which amassed a stake valued at $2.9 million. Basswood Capital, BlueCrest Capital Mgmt., and Holocene Advisors were also very fond of the stock, giving the stock large weights in their portfolios.

Since Valley National Bancorp (NASDAQ:VLY) has faced declining sentiment from the smart money, it’s easy to see that there lies a certain “tier” of fund managers who were dropping their full holdings heading into Q3. It’s worth mentioning that Anton Schutz’s Mendon Capital Advisors sold off the biggest stake of the “upper crust” of funds tracked by Insider Monkey, valued at close to $8.2 million in stock. Gregg Moskowitz’s fund, Interval Partners, also said goodbye to its stock, about $4.5 million worth. These transactions are intriguing to say the least, as total hedge fund interest stayed the same (this is a bearish signal in our experience).

As you can see these stocks had an average of 21 hedge funds with bullish positions and the average amount invested in these stocks was $202 million. That figure was $14 million in VLY’s case. Newfield Exploration Co. (NYSE:NFX) is the most popular stock in this table. On the other hand Sabra Health Care REIT Inc (NASDAQ:SBRA) is the least popular one with only 15 bullish hedge fund positions. Compared to these stocks Valley National Bancorp (NASDAQ:VLY) is even less popular than SBRA. Hedge funds dodged a bullet by taking a bearish stance towards VLY. Our calculations showed that the top 15 most popular hedge fund stocks returned 24.2% through April 22nd and outperformed the S&P 500 ETF (SPY) by more than 7 percentage points. Unfortunately VLY wasn’t nearly as popular as these 15 stock (hedge fund sentiment was very bearish); VLY investors were disappointed as the stock returned 14.7% and underperformed the market. If you are interested in investing in large cap stocks with huge upside potential, you should check out the top 15 most popular stocks) among hedge funds as 13 of these stocks already outperformed the market this year.