Is Valhi, Inc. (VHI) Going to Burn These Hedge Funds?

It was a rough fourth quarter for many hedge funds, which were naturally unable to overcome the big dip in the broad market, as the S&P 500 fell by about 4.8% during 2018 and average hedge fund losing about 1%. The Russell 2000, composed of smaller companies, performed even worse, trailing the S&P by more than 6 percentage points, as investors fled less-known quantities for safe havens. Luckily hedge funds were shifting their holdings into large-cap stocks. The 20 most popular hedge fund stocks actually generated an average return of 24.4% during the first 9 months of 2019 and outperformed the S&P 500 ETF by 4 percentage points. We are done processing the latest 13f filings and in this article we will study how hedge fund sentiment towards Valhi, Inc. (NYSE:VHI) changed during the first quarter.

Hedge fund interest in Valhi, Inc. (NYSE:VHI) shares was flat at the end of last quarter. This is usually a negative indicator. At the end of this article we will also compare VHI to other stocks including i3 Verticals, Inc. (NASDAQ:IIIV), Contura Energy, Inc. (NYSE:CTRA), and DMC Global Inc. (NASDAQ:BOOM) to get a better sense of its popularity. Our calculations also showed that VHI isn’t among the 30 most popular stocks among hedge funds (see the video below).

What does smart money think about Valhi, Inc. (NYSE:VHI)?

At Q2’s end, a total of 6 of the hedge funds tracked by Insider Monkey held long positions in this stock, a change of 0% from the first quarter of 2019. Below, you can check out the change in hedge fund sentiment towards VHI over the last 16 quarters. So, let’s review which hedge funds were among the top holders of the stock and which hedge funds were making big moves. 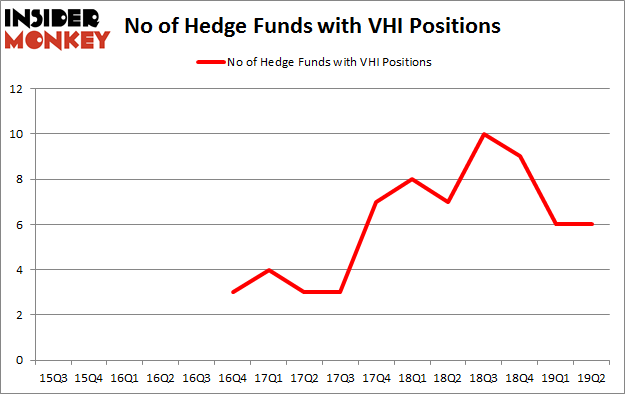 The largest stake in Valhi, Inc. (NYSE:VHI) was held by Renaissance Technologies, which reported holding $4.3 million worth of stock at the end of March. It was followed by Zebra Capital Management with a $1.4 million position. Other investors bullish on the company included Arrowstreet Capital, Fondren Management, and Two Sigma Advisors.

We view hedge fund activity in the stock unfavorable, but in this case there was only a single hedge fund selling its entire position: Royce & Associates. One hedge fund selling its entire position doesn’t always imply a bearish intent. Theoretically a hedge fund may decide to sell a promising position in order to invest the proceeds in a more promising idea. However, we don’t think this is the case in this case because only one of the 800+ hedge funds tracked by Insider Monkey identified as a viable investment and initiated a position in the stock (that fund was Kahn Brothers).

As you can see these stocks had an average of 15.75 hedge funds with bullish positions and the average amount invested in these stocks was $142 million. That figure was $8 million in VHI’s case. Contura Energy, Inc. (NYSE:CTRA) is the most popular stock in this table. On the other hand National Western Life Group, Inc.(NASDAQ:NWLI) is the least popular one with only 8 bullish hedge fund positions. Compared to these stocks Valhi, Inc. (NYSE:VHI) is even less popular than NWLI. Hedge funds dodged a bullet by taking a bearish stance towards VHI. Our calculations showed that the top 20 most popular hedge fund stocks returned 24.4% in 2019 through September 30th and outperformed the S&P 500 ETF (SPY) by 4 percentage points. Unfortunately VHI wasn’t nearly as popular as these 20 stocks (hedge fund sentiment was very bearish); VHI investors were disappointed as the stock returned -35.4% during the third quarter and underperformed the market. If you are interested in investing in large cap stocks with huge upside potential, you should check out the top 20 most popular stocks among hedge funds as many of these stocks already outperformed the market so far in 2019.