Hedge Funds and other institutional investors have just completed filing their 13Fs with the Securities and Exchange Commission, revealing their equity portfolios as of the end of March. At Insider Monkey, we follow nearly 750 active hedge funds and notable investors and by analyzing their 13F filings, we can determine the stocks that they are collectively bullish on. One of their picks is Universal Display Corporation (NASDAQ:OLED), so let’s take a closer look at the sentiment that surrounds it in the current quarter.

Is Universal Display Corporation (NASDAQ:OLED) a worthy stock to buy now? The smart money is in an optimistic mood. The number of bullish hedge fund bets improved by 8 lately. Our calculations also showed that oled isn’t among the 30 most popular stocks among hedge funds. OLED was in 18 hedge funds’ portfolios at the end of March. There were 10 hedge funds in our database with OLED holdings at the end of the previous quarter.

At Q1’s end, a total of 18 of the hedge funds tracked by Insider Monkey were bullish on this stock, a change of 80% from the fourth quarter of 2018. By comparison, 24 hedge funds held shares or bullish call options in OLED a year ago. With hedgies’ capital changing hands, there exists a select group of notable hedge fund managers who were increasing their stakes considerably (or already accumulated large positions). 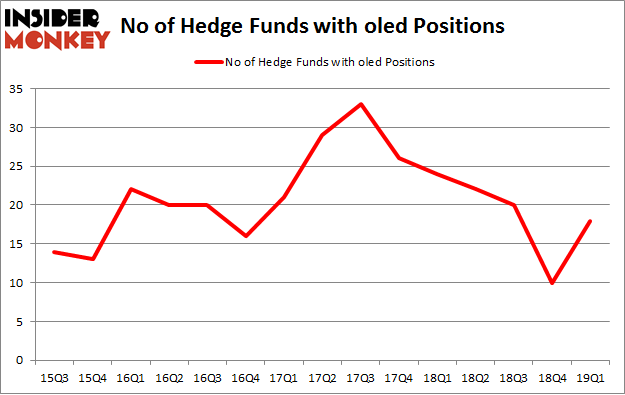 More specifically, Polar Capital was the largest shareholder of Universal Display Corporation (NASDAQ:OLED), with a stake worth $48.7 million reported as of the end of March. Trailing Polar Capital was Citadel Investment Group, which amassed a stake valued at $47.9 million. Kayak Investment Partners, D E Shaw, and Highbridge Capital Management were also very fond of the stock, giving the stock large weights in their portfolios.

With a general bullishness amongst the heavyweights, key hedge funds have been driving this bullishness. Kayak Investment Partners, managed by Daryl Smith, initiated the biggest position in Universal Display Corporation (NASDAQ:OLED). Kayak Investment Partners had $20.9 million invested in the company at the end of the quarter. Glenn Russell Dubin’s Highbridge Capital Management also initiated a $12.3 million position during the quarter. The other funds with brand new OLED positions are David Harding’s Winton Capital Management, Larry Chen and Terry Zhang’s Tairen Capital, and Israel Englander’s Millennium Management.

As you can see these stocks had an average of 21.25 hedge funds with bullish positions and the average amount invested in these stocks was $611 million. That figure was $133 million in OLED’s case. Sealed Air Corporation (NYSE:SEE) is the most popular stock in this table. On the other hand Mobile TeleSystems Public Joint Stock Company. (NYSE:MBT) is the least popular one with only 13 bullish hedge fund positions. Universal Display Corporation (NASDAQ:OLED) is not the least popular stock in this group but hedge fund interest is still below average. This is a slightly negative signal and we’d rather spend our time researching stocks that hedge funds are piling on. Our calculations showed that top 20 most popular stocks among hedge funds returned 1.9% in Q2 through May 30th and outperformed the S&P 500 ETF (SPY) by more than 3 percentage points. Unfortunately OLED wasn’t nearly as popular as these 20 stocks (hedge fund sentiment was quite bearish); OLED investors were disappointed as the stock returned -2.3% during the same time period and underperformed the market. If you are interested in investing in large cap stocks with huge upside potential, you should check out the top 20 most popular stocks among hedge funds as 13 of these stocks already outperformed the market so far in Q2.