Hedge fund managers like David Einhorn, Bill Ackman, or Carl Icahn became billionaires through reaping large profits for their investors, which is why piggybacking their stock picks may provide us with significant returns as well. Many hedge funds, like Paul Singer’s Elliott Management, are pretty secretive, but we can still get some insights by analyzing their quarterly 13F filings. One of the most fertile grounds for large abnormal returns is hedge funds’ most popular small-cap picks, which are not so widely followed and often trade at a discount to their intrinsic value. In this article we will check out hedge fund activity in another small-cap stock: United States Cellular Corporation (NYSE:USM).

United States Cellular Corporation (NYSE:USM) was in 15 hedge funds’ portfolios at the end of the second quarter of 2019. USM investors should pay attention to an increase in hedge fund interest lately. There were 14 hedge funds in our database with USM holdings at the end of the previous quarter. Our calculations also showed that USM isn’t among the 30 most popular stocks among hedge funds (view the video below). 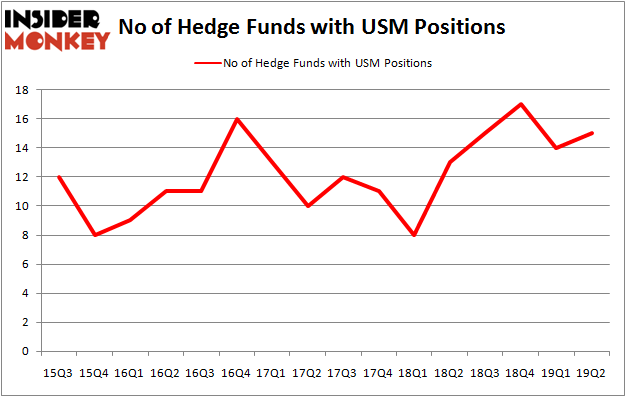 More specifically, GAMCO Investors was the largest shareholder of United States Cellular Corporation (NYSE:USM), with a stake worth $87 million reported as of the end of March. Trailing GAMCO Investors was Renaissance Technologies, which amassed a stake valued at $37.7 million. AQR Capital Management, Arrowstreet Capital, and GLG Partners were also very fond of the stock, giving the stock large weights in their portfolios.

As aggregate interest increased, some big names have been driving this bullishness. Marshall Wace LLP, managed by Paul Marshall and Ian Wace, assembled the most valuable position in United States Cellular Corporation (NYSE:USM). Marshall Wace LLP had $2.1 million invested in the company at the end of the quarter. David Harding’s Winton Capital Management also made a $0.4 million investment in the stock during the quarter. The following funds were also among the new USM investors: Steve Cohen’s Point72 Asset Management, Matthew Hulsizer’s PEAK6 Capital Management, and Gavin Saitowitz and Cisco J. del Valle’s Springbok Capital.

As you can see these stocks had an average of 16 hedge funds with bullish positions and the average amount invested in these stocks was $397 million. That figure was $177 million in USM’s case. CarGurus, Inc. (NASDAQ:CARG) is the most popular stock in this table. On the other hand Rayonier Inc. (NYSE:RYN) is the least popular one with only 14 bullish hedge fund positions. United States Cellular Corporation (NYSE:USM) is not the least popular stock in this group but hedge fund interest is still below average. This is a slightly negative signal and we’d rather spend our time researching stocks that hedge funds are piling on. Our calculations showed that top 20 most popular stocks among hedge funds returned 24.4% in 2019 through September 30th and outperformed the S&P 500 ETF (SPY) by 4 percentage points. Unfortunately USM wasn’t nearly as popular as these 20 stocks (hedge fund sentiment was quite bearish); USM investors were disappointed as the stock returned -15.9% during the third quarter and underperformed the market. If you are interested in investing in large cap stocks with huge upside potential, you should check out the top 20 most popular stocks among hedge funds as many of these stocks already outperformed the market so far in 2019.