Is UDR, Inc. (UDR) A Good Stock To Buy According To Hedge Funds?

Our extensive research has shown that imitating the smart money can generate significant returns for retail investors, which is why we track more than 700 prominent money managers and analyze their quarterly 13F filings. The stocks that are heavily bought by hedge funds historically outperformed the market, though there is no shortage of high profile failures like hedge funds’ recent losses in Facebook. Let’s take a closer look at what the funds we track think about UDR, Inc. (NYSE:UDR) in this article.

Is UDR, Inc. (NYSE:UDR) a good stock to buy? The best stock pickers are getting less optimistic. The number of long hedge fund bets dropped by 1 lately. Our calculations also showed that UDR isn’t among the 30 most popular stocks among hedge funds.

We’re going to take a look at the recent hedge fund action regarding UDR, Inc. (NYSE:UDR).

What does the smart money think about UDR, Inc. (NYSE:UDR)? 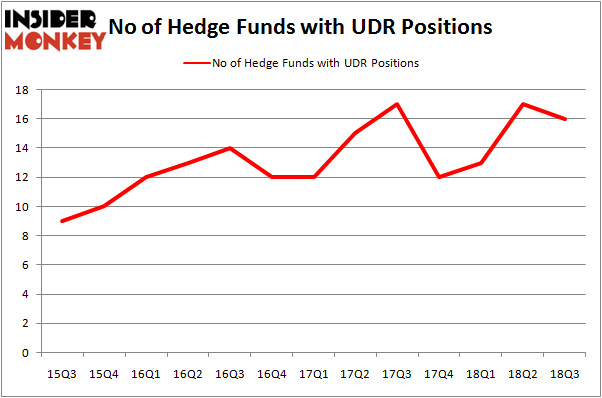 More specifically, Renaissance Technologies was the largest shareholder of UDR, Inc. (NYSE:UDR), with a stake worth $371.9 million reported as of the end of September. Trailing Renaissance Technologies was Citadel Investment Group, which amassed a stake valued at $32.6 million. Adage Capital Management, Highbridge Capital Management, and Two Sigma Advisors were also very fond of the stock, giving the stock large weights in their portfolios.

Seeing as UDR, Inc. (NYSE:UDR) has witnessed falling interest from hedge fund managers, logic holds that there were a few fund managers that decided to sell off their full holdings heading into Q3. Intriguingly, D. E. Shaw’s D E Shaw cut the biggest investment of the 700 funds tracked by Insider Monkey, worth about $6.8 million in stock, and Matthew Tewksbury’s Stevens Capital Management was right behind this move, as the fund dumped about $5.8 million worth. These transactions are important to note, as aggregate hedge fund interest was cut by 1 funds heading into Q3.

As you can see these stocks had an average of 26.5 hedge funds with bullish positions and the average amount invested in these stocks was $723 million. That figure was $447 million in UDR’s case. Yandex NV (NASDAQ:YNDX) is the most popular stock in this table. On the other hand Westlake Chemical Corporation (NYSE:WLK) is the least popular one with only 19 bullish hedge fund positions. Compared to these stocks UDR, Inc. (NYSE:UDR) is even less popular than WLK. Considering that hedge funds aren’t fond of this stock in relation to other companies analyzed in this article, it may be a good idea to analyze it in detail and understand why the smart money isn’t behind this stock. This isn’t necessarily bad news. Although it is possible that hedge funds may think the stock is overpriced and view the stock as a short candidate, they may not be very familiar with the bullish thesis. In either case more research is warranted.

Is Geospace Technologies Corp (GEOS) A Good Stock To Buy?

Should You Avoid Innospec Inc. (IOSP)?