Is TTEC Holdings, Inc. (TTEC) A Good Stock To Buy?

Our extensive research has shown that imitating the smart money can generate significant returns for retail investors, which is why we track nearly 750 active prominent money managers and analyze their quarterly 13F filings. The stocks that are heavily bought by hedge funds historically outperformed the market, though there is no shortage of high profile failures like hedge funds’ recent losses in Facebook. Let’s take a closer look at what the funds we track think about TTEC Holdings, Inc. (NASDAQ:TTEC) in this article.

TTEC Holdings, Inc. (NASDAQ:TTEC) was in 15 hedge funds’ portfolios at the end of the fourth quarter of 2018. TTEC investors should be aware of an increase in hedge fund interest recently. There were 14 hedge funds in our database with TTEC positions at the end of the previous quarter. Our calculations also showed that TTEC isn’t among the 30 most popular stocks among hedge funds.

What does the smart money think about TTEC Holdings, Inc. (NASDAQ:TTEC)? 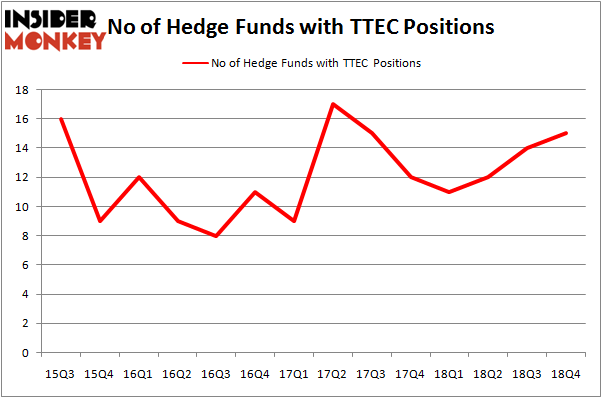 The largest stake in TTEC Holdings, Inc. (NASDAQ:TTEC) was held by Renaissance Technologies, which reported holding $10.4 million worth of stock at the end of September. It was followed by Millennium Management with a $3.1 million position. Other investors bullish on the company included Citadel Investment Group, Leucadia National, and D E Shaw.

Now, specific money managers have been driving this bullishness. Element Capital Management, managed by Jeffrey Talpins, assembled the largest position in TTEC Holdings, Inc. (NASDAQ:TTEC). Element Capital Management had $0.3 million invested in the company at the end of the quarter. Brandon Haley’s Holocene Advisors also made a $0.2 million investment in the stock during the quarter. The only other fund with a brand new TTEC position is Joel Greenblatt’s Gotham Asset Management.

As you can see these stocks had an average of 12.75 hedge funds with bullish positions and the average amount invested in these stocks was $181 million. That figure was $20 million in TTEC’s case. Mallinckrodt plc (NYSE:MNK) is the most popular stock in this table. On the other hand Autolus Therapeutics plc (NASDAQ:AUTL) is the least popular one with only 6 bullish hedge fund positions. TTEC Holdings, Inc. (NASDAQ:TTEC) is not the most popular stock in this group but hedge fund interest is still above average. Our calculations showed that top 15 most popular stocks) among hedge funds returned 24.2% through April 22nd and outperformed the S&P 500 ETF (SPY) by more than 7 percentage points. Hedge funds were also right about betting on TTEC as the stock returned 24.7% and outperformed the market by an even larger margin. Hedge funds were rewarded for their relative bullishness.