As we already know from media reports and hedge fund investor letters, hedge funds delivered their best returns in a decade. Most investors who decided to stick with hedge funds after a rough 2018 recouped their losses by the end of the second quarter. We get to see hedge funds’ thoughts towards the market and individual stocks by aggregating their quarterly portfolio movements and reading their investor letters. In this article, we will particularly take a look at what hedge funds think about Translate Bio, Inc. (NASDAQ:TBIO).

Is Translate Bio, Inc. (NASDAQ:TBIO) ready to rally soon? Investors who are in the know are taking an optimistic view. The number of bullish hedge fund positions moved up by 3 in recent months. Our calculations also showed that TBIO isn’t among the 30 most popular stocks among hedge funds (see the video below). TBIO was in 10 hedge funds’ portfolios at the end of the second quarter of 2019. There were 7 hedge funds in our database with TBIO positions at the end of the previous quarter.

What have hedge funds been doing with Translate Bio, Inc. (NASDAQ:TBIO)?

At the end of the second quarter, a total of 10 of the hedge funds tracked by Insider Monkey were long this stock, a change of 43% from one quarter earlier. On the other hand, there were a total of 15 hedge funds with a bullish position in TBIO a year ago. With the smart money’s capital changing hands, there exists a few key hedge fund managers who were increasing their stakes significantly (or already accumulated large positions). 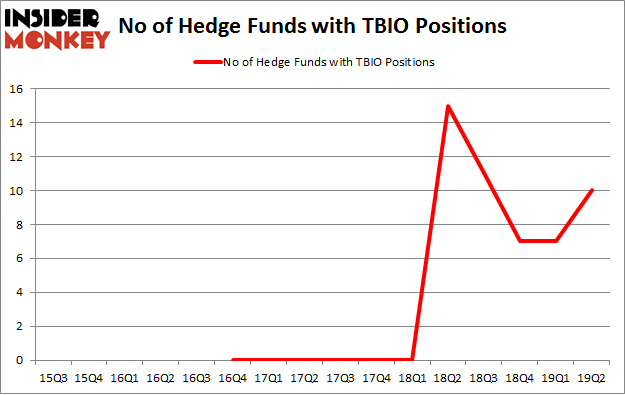 The largest stake in Translate Bio, Inc. (NASDAQ:TBIO) was held by Baupost Group, which reported holding $109.4 million worth of stock at the end of March. It was followed by Frazier Healthcare Partners with a $21.3 million position. Other investors bullish on the company included Rock Springs Capital Management, Perceptive Advisors, and Highbridge Capital Management.

With a general bullishness amongst the heavyweights, key hedge funds have jumped into Translate Bio, Inc. (NASDAQ:TBIO) headfirst. Frazier Healthcare Partners, managed by Alan Frazier, initiated the largest position in Translate Bio, Inc. (NASDAQ:TBIO). Frazier Healthcare Partners had $21.3 million invested in the company at the end of the quarter. Glenn Russell Dubin’s Highbridge Capital Management also made a $3.9 million investment in the stock during the quarter. The other funds with new positions in the stock are Nathan Fischel’s DAFNA Capital Management, Vishal Saluja and Pham Quang’s Endurant Capital Management, and Renaissance Technologies.

As you can see these stocks had an average of 9.5 hedge funds with bullish positions and the average amount invested in these stocks was $94 million. That figure was $156 million in TBIO’s case. TPG Pace Holdings Corp. (NYSE:TPGH) is the most popular stock in this table. On the other hand ChipMOS TECHNOLOGIES INC. (NASDAQ:IMOS) is the least popular one with only 2 bullish hedge fund positions. Translate Bio, Inc. (NASDAQ:TBIO) is not the most popular stock in this group but hedge fund interest is still above average. This is a slightly positive signal but we’d rather spend our time researching stocks that hedge funds are piling on. Our calculations showed that top 20 most popular stocks among hedge funds returned 24.4% in 2019 through September 30th and outperformed the S&P 500 ETF (SPY) by 4 percentage points. Unfortunately TBIO wasn’t nearly as popular as these 20 stocks and hedge funds that were betting on TBIO were disappointed as the stock returned -21.5% during the third quarter and underperformed the market. If you are interested in investing in large cap stocks with huge upside potential, you should check out the top 20 most popular stocks among hedge funds as many of these stocks already outperformed the market so far this year.

Hedge Funds Have Never Been This Bullish On Seaboard Corporation (SEB)
Monthly Newsletter Strategy
Download a free copy of our newsletter and see the details inside!
Hedge Fund Resource Center
Related News
Should You Avoid Translate Bio, Inc. (TBIO)? 11 Largest Auto Insurance Companies In The US In 2019 10 Poorest Cities in America in 2019 8 Lowest Tar and Nicotine Cigarette Brands in 2019
Billionaire Hedge Funds