Is TherapeuticsMD Inc (TXMD) A Good Stock To Buy?

Legendary investors such as Jeffrey Talpins and Seth Klarman earn enormous amounts of money for themselves and their investors by doing in-depth research on small-cap stocks that big brokerage houses don’t publish. Small cap stocks -especially when they are screened well- can generate substantial outperformance versus a boring index fund. That’s why we analyze the activity of those elite funds in these small-cap stocks. In the following paragraphs, we analyze TherapeuticsMD Inc (NASDAQ:TXMD) from the perspective of those elite funds.

TherapeuticsMD Inc (NASDAQ:TXMD) was in 10 hedge funds’ portfolios at the end of December. TXMD investors should pay attention to a decrease in hedge fund sentiment lately. There were 14 hedge funds in our database with TXMD holdings at the end of the previous quarter. Our calculations also showed that txmd isn’t among the 30 most popular stocks among hedge funds.

According to most stock holders, hedge funds are perceived as unimportant, outdated investment tools of the past. While there are over 8000 funds with their doors open today, Our researchers choose to focus on the bigwigs of this club, approximately 750 funds. It is estimated that this group of investors administer most of the smart money’s total asset base, and by observing their unrivaled equity investments, Insider Monkey has found numerous investment strategies that have historically outrun the S&P 500 index. Insider Monkey’s flagship hedge fund strategy outrun the S&P 500 index by nearly 5 percentage points a year since its inception in May 2014 through early November 2018. We were able to generate large returns even by identifying short candidates. Our portfolio of short stocks lost 27.5% since February 2017 (through March 12th) even though the market was up nearly 25% during the same period. We just shared a list of 6 short targets in our latest quarterly update and they are already down an average of 6% in less than a month.

What does the smart money think about TherapeuticsMD Inc (NASDAQ:TXMD)? 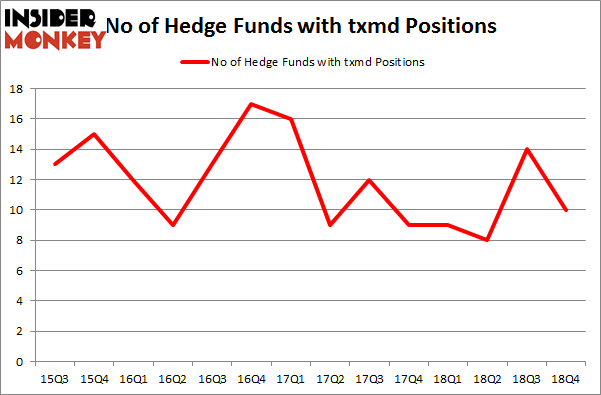 The largest stake in TherapeuticsMD Inc (NASDAQ:TXMD) was held by Daruma Asset Management, which reported holding $24.2 million worth of stock at the end of December. It was followed by Millennium Management with a $10.9 million position. Other investors bullish on the company included Rubric Capital Management, Perceptive Advisors, and Citadel Investment Group.

Seeing as TherapeuticsMD Inc (NASDAQ:TXMD) has experienced declining sentiment from the entirety of the hedge funds we track, it’s easy to see that there is a sect of funds that elected to cut their entire stakes last quarter. Intriguingly, Ori Hershkovitz’s Nexthera Capital dropped the biggest stake of all the hedgies watched by Insider Monkey, totaling close to $8.6 million in stock. Philip Hempleman’s fund, Ardsley Partners, also dumped its stock, about $4.9 million worth. These bearish behaviors are interesting, as aggregate hedge fund interest was cut by 4 funds last quarter.

As you can see these stocks had an average of 15 hedge funds with bullish positions and the average amount invested in these stocks was $90 million. That figure was $49 million in TXMD’s case. Kadant Inc. (NYSE:KAI) is the most popular stock in this table. On the other hand Washington Prime Group Inc. (NYSE:WPG) is the least popular one with only 13 bullish hedge fund positions. Compared to these stocks TherapeuticsMD Inc (NASDAQ:TXMD) is even less popular than WPG. Hedge funds dodged a bullet by taking a bearish stance towards TXMD. Our calculations showed that the top 15 most popular hedge fund stocks returned 24.2% through April 22nd and outperformed the S&P 500 ETF (SPY) by more than 7 percentage points. Unfortunately TXMD wasn’t nearly as popular as these 15 stock (hedge fund sentiment was very bearish); TXMD investors were disappointed as the stock returned 11.3% and underperformed the market. If you are interested in investing in large cap stocks with huge upside potential, you should check out the top 15 most popular stocks) among hedge funds as 13 of these stocks already outperformed the market this year.