Is The Williams Companies, Inc. (WMB) Going to Burn These Hedge Funds?

Is The Williams Companies, Inc. (NYSE:WMB) a good stock to buy right now? We at Insider Monkey like to examine what billionaires and hedge funds think of a company before spending days of research on it. Given their 2 and 20 payment structure, hedge funds have more incentives and resources than the average investor. The funds have access to expert networks and get tips from industry insiders. They also have numerous Ivy League graduates and MBAs. Like everyone else, hedge funds perform miserably at times, but their consensus picks have historically outperformed the market after risk adjustments.

Is The Williams Companies, Inc. (NYSE:WMB) undervalued? The smart money is taking a bullish view. The number of bullish hedge fund bets went up by 2 in recent months. Our calculations also showed that WMB isn’t among the 30 most popular stocks among hedge funds.

Unlike some fund managers who are betting on Dow reaching 40000 in a year, our long-short investment strategy doesn’t rely on bull markets to deliver double digit returns. We only rely on hedge fund buy/sell signals. We’re going to take a glance at the recent hedge fund action regarding The Williams Companies, Inc. (NYSE:WMB).

How have hedgies been trading The Williams Companies, Inc. (NYSE:WMB)?

At the end of the second quarter, a total of 34 of the hedge funds tracked by Insider Monkey were bullish on this stock, a change of 6% from the previous quarter. The graph below displays the number of hedge funds with bullish position in WMB over the last 16 quarters. With hedge funds’ capital changing hands, there exists an “upper tier” of noteworthy hedge fund managers who were upping their stakes considerably (or already accumulated large positions). 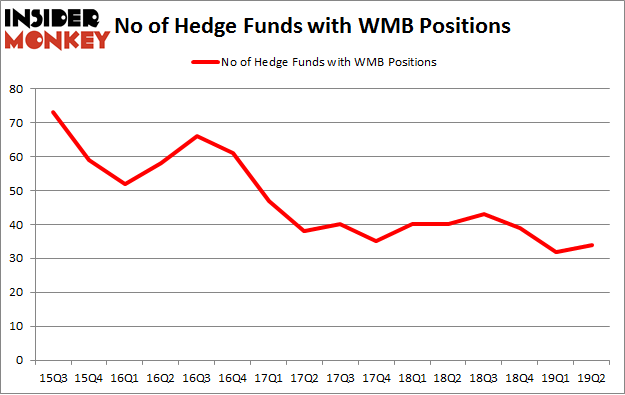 According to Insider Monkey’s hedge fund database, Robert Pitts’s Steadfast Capital Management has the number one position in The Williams Companies, Inc. (NYSE:WMB), worth close to $289.3 million, corresponding to 3.9% of its total 13F portfolio. Coming in second is Glenview Capital, managed by Larry Robbins, which holds a $205.7 million position; the fund has 1.9% of its 13F portfolio invested in the stock. Other members of the smart money that hold long positions include Joshua Friedman and Mitchell Julis’s Canyon Capital Advisors, Israel Englander’s Millennium Management and Brian J. Higgins’s King Street Capital.

Consequently, some big names were breaking ground themselves. Perella Weinberg Partners assembled the biggest position in The Williams Companies, Inc. (NYSE:WMB). Perella Weinberg Partners had $20.8 million invested in the company at the end of the quarter. Anand Parekh’s Alyeska Investment Group also made a $20.3 million investment in the stock during the quarter. The other funds with brand new WMB positions are Paul Marshall and Ian Wace’s Marshall Wace LLP, Matthew Tewksbury’s Stevens Capital Management, and Dmitry Balyasny’s Balyasny Asset Management.

As you can see these stocks had an average of 23.5 hedge funds with bullish positions and the average amount invested in these stocks was $592 million. That figure was $1075 million in WMB’s case. Advanced Micro Devices, Inc. (NASDAQ:AMD) is the most popular stock in this table. On the other hand China Unicom (Hong Kong) Limited (NYSE:CHU) is the least popular one with only 6 bullish hedge fund positions. The Williams Companies, Inc. (NYSE:WMB) is not the most popular stock in this group but hedge fund interest is still above average. This is a slightly positive signal but we’d rather spend our time researching stocks that hedge funds are piling on. Our calculations showed that top 20 most popular stocks among hedge funds returned 24.4% in 2019 through September 30th and outperformed the S&P 500 ETF (SPY) by 4 percentage points. Unfortunately WMB wasn’t nearly as popular as these 20 stocks and hedge funds that were betting on WMB were disappointed as the stock returned -12.9% during the third quarter and underperformed the market. If you are interested in investing in large cap stocks with huge upside potential, you should check out the top 20 most popular stocks (see the video below) among hedge funds as many of these stocks already outperformed the market so far this year.