Is The Sherwin-Williams Company (SHW) Going to Burn These Hedge Funds?

Hedge funds and large money managers usually invest with a focus on the long-term horizon and, therefore, short-lived dips or bumps on the charts, usually don’t make them change their opinion towards a company. This time it may be different. During the fourth quarter of 2018 we observed increased volatility and small-cap stocks underperformed the market. Things completely reversed during the first half of 2019. Hedge fund investor letters indicated that they are cutting their overall exposure, closing out some position and doubling down on others. Let’s take a look at the hedge fund sentiment towards The Sherwin-Williams Company (NYSE:SHW) to find out whether it was one of their high conviction long-term ideas.

The Sherwin-Williams Company (NYSE:SHW) shareholders have witnessed a decrease in hedge fund interest of late though overall hedge fund sentiment is still above average. Our calculations also showed that SHW isn’t among the 30 most popular stocks among hedge funds (see the video below). 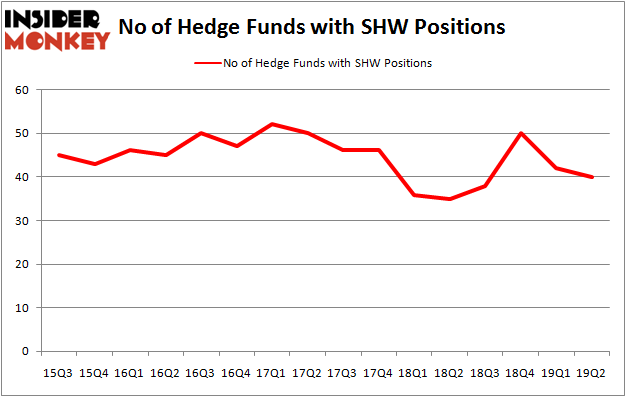 Unlike some fund managers who are betting on Dow reaching 40000 in a year, our long-short investment strategy doesn’t rely on bull markets to deliver double digit returns. We only rely on hedge fund buy/sell signals. We’re going to view the key hedge fund action encompassing The Sherwin-Williams Company (NYSE:SHW).

How are hedge funds trading The Sherwin-Williams Company (NYSE:SHW)?

Heading into the third quarter of 2019, a total of 40 of the hedge funds tracked by Insider Monkey were long this stock, a change of -5% from one quarter earlier. The graph below displays the number of hedge funds with bullish position in SHW over the last 16 quarters. With the smart money’s positions undergoing their usual ebb and flow, there exists a select group of noteworthy hedge fund managers who were boosting their stakes considerably (or already accumulated large positions).

The largest stake in The Sherwin-Williams Company (NYSE:SHW) was held by OZ Management, which reported holding $280.3 million worth of stock at the end of March. It was followed by Farallon Capital with a $213.4 million position. Other investors bullish on the company included Chilton Investment Company, Iridian Asset Management, and Adage Capital Management.

Judging by the fact that The Sherwin-Williams Company (NYSE:SHW) has faced bearish sentiment from the smart money, we can see that there exists a select few hedgies that slashed their entire stakes last quarter. It’s worth mentioning that David Gallo’s Valinor Management LLC sold off the largest investment of the 750 funds tracked by Insider Monkey, comprising an estimated $82.9 million in stock. Renaissance Technologies, also said goodbye to its stock, about $15.1 million worth. These moves are important to note, as aggregate hedge fund interest dropped by 2 funds last quarter.

Let’s now take a look at hedge fund activity in other stocks – not necessarily in the same industry as The Sherwin-Williams Company (NYSE:SHW) but similarly valued. These stocks are The Bank of New York Mellon Corporation (NYSE:BK), Public Storage (NYSE:PSA), Analog Devices, Inc. (NASDAQ:ADI), and AFLAC Incorporated (NYSE:AFL). This group of stocks’ market caps are closest to SHW’s market cap.

As you can see these stocks had an average of 30 hedge funds with bullish positions and the average amount invested in these stocks was $2350 million. That figure was $1430 million in SHW’s case. Analog Devices, Inc. (NASDAQ:ADI) is the most popular stock in this table. On the other hand Public Storage (NYSE:PSA) is the least popular one with only 20 bullish hedge fund positions. The Sherwin-Williams Company (NYSE:SHW) is not the most popular stock in this group but hedge fund interest is still above average. Our calculations showed that top 20 most popular stocks among hedge funds returned 24.4% in 2019 through September 30th and outperformed the S&P 500 ETF (SPY) by 4 percentage points. Hedge funds were also right about betting on SHW as the stock returned 20.2% during the third quarter and outperformed the market. Hedge funds were rewarded for their relative bullishness.