Is The Royal Bank of Scotland Group plc (RBS) A Good Stock To Buy?

Insider Monkey has processed numerous 13F filings of hedge funds and successful value investors to create an extensive database of hedge fund holdings. The 13F filings show the hedge funds’ and successful investors’ positions as of the end of the second quarter. You can find write-ups about an individual hedge fund’s trades on numerous financial news websites. However, in this article we will take a look at their collective moves and analyze what the smart money thinks of The Royal Bank of Scotland Group plc (NYSE:RBS) based on that data.

Is The Royal Bank of Scotland Group plc (NYSE:RBS) a buy, sell, or hold? The smart money is taking an optimistic view. The number of bullish hedge fund positions advanced by 3 recently. Our calculations also showed that RBS isn’t among the 30 most popular stocks among hedge funds.

To the average investor there are a multitude of signals stock traders use to grade stocks. A couple of the less utilized signals are hedge fund and insider trading moves. Our experts have shown that, historically, those who follow the top picks of the best fund managers can trounce the broader indices by a solid margin (see the details here).

Unlike some fund managers who are betting on Dow reaching 40000 in a year, our long-short investment strategy doesn’t rely on bull markets to deliver double digit returns. We only rely on hedge fund buy/sell signals. Let’s take a gander at the key hedge fund action surrounding The Royal Bank of Scotland Group plc (NYSE:RBS).

What have hedge funds been doing with The Royal Bank of Scotland Group plc (NYSE:RBS)?

At Q2’s end, a total of 6 of the hedge funds tracked by Insider Monkey were bullish on this stock, a change of 100% from the first quarter of 2019. On the other hand, there were a total of 9 hedge funds with a bullish position in RBS a year ago. With hedgies’ sentiment swirling, there exists a few notable hedge fund managers who were upping their holdings significantly (or already accumulated large positions). 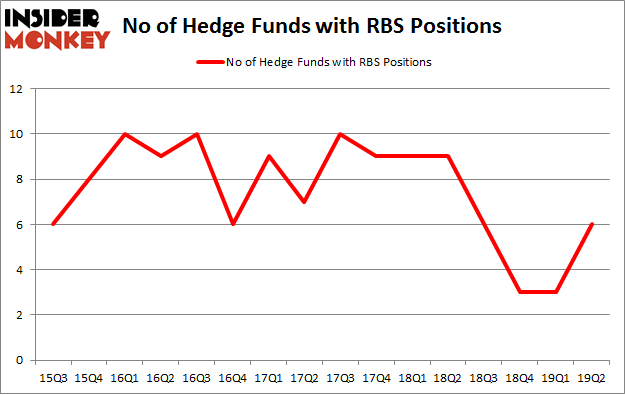 More specifically, Renaissance Technologies was the largest shareholder of The Royal Bank of Scotland Group plc (NYSE:RBS), with a stake worth $30.6 million reported as of the end of March. Trailing Renaissance Technologies was Citadel Investment Group, which amassed a stake valued at $1.1 million. Marshall Wace LLP, Two Sigma Advisors, and Citadel Investment Group were also very fond of the stock, giving the stock large weights in their portfolios.

As you can see these stocks had an average of 26.75 hedge funds with bullish positions and the average amount invested in these stocks was $1473 million. That figure was $34 million in RBS’s case. NetEase, Inc (NASDAQ:NTES) is the most popular stock in this table. On the other hand Welltower Inc. (NYSE:WELL) is the least popular one with only 17 bullish hedge fund positions. Compared to these stocks The Royal Bank of Scotland Group plc (NYSE:RBS) is even less popular than WELL. Hedge funds dodged a bullet by taking a bearish stance towards RBS. Our calculations showed that the top 20 most popular hedge fund stocks returned 24.4% in 2019 through September 30th and outperformed the S&P 500 ETF (SPY) by 4 percentage points. Unfortunately RBS wasn’t nearly as popular as these 20 stocks (hedge fund sentiment was very bearish); RBS investors were disappointed as the stock returned -9.3% during the third quarter and underperformed the market. If you are interested in investing in large cap stocks with huge upside potential, you should check out the top 20 most popular stocks (see the video below) among hedge funds as many of these stocks already outperformed the market so far in 2019.

Did Hedge Funds Drop The Ball On About Activision Blizzard, Inc. (ATVI) ?
Monthly Newsletter Strategy
Download a free copy of our newsletter and see the details inside!
Hedge Fund Resource Center
Related News
Is Royal Bank of Scotland Group plc (RBS) Going to Burn These Hedge Funds? Is Royal Bank of Scotland Group PLC (RBS) A Good Stock To Buy? Why Descartes Systems Group Inc. (USA) (DSGX), AmeriGas Partners LP (APU), and Three Other Stocks Are in Spotlight Today Why RBS, Cheniere Energy, Regeneron Pharmaceuticals & Two Other Stocks Are in Spotlight Today Why Investors Are Buzzing about BlackBerry, IBM, Deutsche Bank, and Others Deutsche Bank Fine Hits Credit Suisse and RBS Hard, Plus 3 Other Stocks That Are Getting Beaten Down Today Why American Airlines, Royal Bank of Scotland, and More Are Trending Today 10 Biggest Companies That Offer Pensions 15 Wealthiest Families in the World vs. First Generation Ultra Billionaires 5 Makeup Companies that Don’t Test on Animals
Billionaire Hedge Funds