“Market conditions are changing. The continued rise in interest rates suggests we are in the early stages of a bond bear market, which could intensify as central banks withdraw liquidity. The receding tide of liquidity will start to reveal more rocks beyond what has been exposed in emerging markets so far, and the value of a value discipline will be in avoiding the biggest capital-destroying rocks. If a rock emerges on the crowded shore of U.S. momentum, it could result in a major liquidity challenge, as momentum is often most intense on the downside as a crowded trade reverses. So investors are facing a large potential trade-off right now: continue to bet on the current dominance of momentum and the S&P 500, or bet on change and take an active value bet in names with attractive value and optionality, but with negative momentum,” said Clearbridge Investments in its market commentary. We aren’t sure whether long-term interest rates will top 5% and value stocks outperform growth, but we follow hedge fund investor letters to understand where the markets and stocks might be going. This article will lay out and discuss the hedge fund and institutional investor sentiment towards The PNC Financial Services Group, Inc. (NYSE:PNC).

The PNC Financial Services Group, Inc. (NYSE:PNC) was in 40 hedge funds’ portfolios at the end of the third quarter of 2018, unchanged from a quarter earlier. PNC did get a big vote of confidence from Berkshire Hathaway during the quarter, being one of 3 Stocks Billionaire Warren Buffett Bought in Q3. PNC also ranked highly among billionaires in general, landing in the top 10 of the 20 Dividend Stocks That Billionaires Are Piling On, with its stable dividend, which has been raised for eight straight years, no doubt accounting for some of the stock’s attraction among the wealthiest investors.

Today there are dozens of methods investors can use to value publicly traded companies. Some of the most innovative methods are hedge fund and insider trading signals. We have shown that, historically, those who follow the top picks of the top fund managers can outperform the broader indices by a very impressive margin (see the details here).

How have hedgies been trading The PNC Financial Services Group, Inc. (NYSE:PNC)? 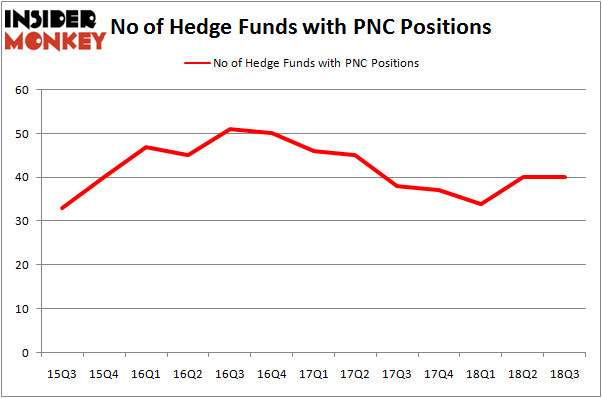 Among these funds, Berkshire Hathaway held the most valuable stake in The PNC Financial Services Group, Inc. (NYSE:PNC), which was worth $829 million at the end of the third quarter. On the second spot was Citadel Investment Group which amassed $449 million worth of shares. Moreover, Arrowstreet Capital, AQR Capital Management, and D E Shaw were also bullish on The PNC Financial Services Group, Inc. (NYSE:PNC), allocating a large percentage of their portfolios to this stock.

Judging by the fact that The PNC Financial Services Group, Inc. (NYSE:PNC) has witnessed falling interest from the aggregate hedge fund industry, we can see that there lies a certain “tier” of hedgies who were dropping their full holdings by the end of the third quarter. Interestingly, Steve Cohen’s Point72 Asset Management dumped the largest stake of the 700 funds tracked by Insider Monkey, totaling close to $75 million in call options. Glenn Russell Dubin’s fund, Highbridge Capital Management, also cut its call options, about $4.1 million worth. These transactions are interesting, as aggregate hedge fund interest stayed the same (this is a bearish signal in our experience).

As you can see these stocks had an average of 43 hedge funds with bullish positions and the average amount invested in these stocks was $2.09 billion. That figure was $3.06 billion in PNC’s case. Celgene Corporation (NASDAQ:CELG) is the most popular stock in this table. On the other hand Occidental Petroleum Corporation (NYSE:OXY) is the least popular one with only 35 bullish hedge fund positions. The PNC Financial Services Group, Inc. (NYSE:PNC) is not the least popular stock in this group but hedge fund interest is still below average. This is a slightly negative signal and we’d rather spend our time researching stocks that hedge funds are piling on, like CELG.