The Liberty SiriusXM Group (NASDAQ:LSXMK) was in 45 hedge funds’ portfolios at the end of December. LSXMK investors should pay attention to a decrease in hedge fund sentiment of late. There were 48 hedge funds in our database with LSXMK holdings at the end of the previous quarter. Our calculations also showed that LSXMK isn’t among the 30 most popular stocks among hedge funds.

We’re going to take a look at the recent hedge fund action regarding The Liberty SiriusXM Group (NASDAQ:LSXMK).

What have hedge funds been doing with The Liberty SiriusXM Group (NASDAQ:LSXMK)?

Heading into the first quarter of 2019, a total of 45 of the hedge funds tracked by Insider Monkey were bullish on this stock, a change of -6% from the second quarter of 2018. By comparison, 41 hedge funds held shares or bullish call options in LSXMK a year ago. With hedgies’ capital changing hands, there exists a select group of notable hedge fund managers who were boosting their stakes considerably (or already accumulated large positions). 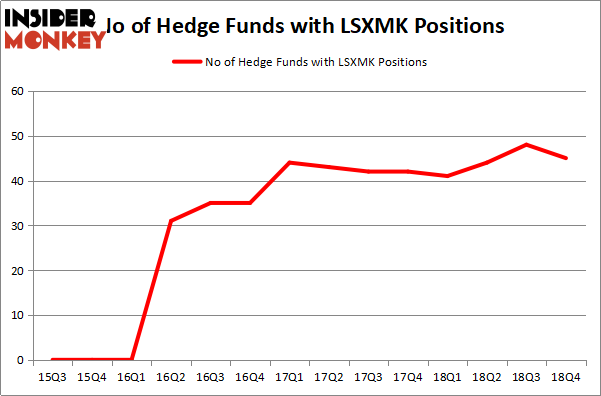 When looking at the institutional investors followed by Insider Monkey, Warren Buffett’s Berkshire Hathaway has the number one position in The Liberty SiriusXM Group (NASDAQ:LSXMK), worth close to $1.1497 billion, comprising 0.6% of its total 13F portfolio. The second most bullish fund manager is Bob Peck and Andy Raab of FPR Partners, with a $274.3 million position; 7.2% of its 13F portfolio is allocated to the company. Other hedge funds and institutional investors with similar optimism consist of D. E. Shaw’s D E Shaw, Michael Lowenstein’s Kensico Capital and Ryan Frick and Oliver Evans’s Dorsal Capital Management.

Due to the fact that The Liberty SiriusXM Group (NASDAQ:LSXMK) has faced falling interest from the smart money, it’s easy to see that there were a few hedge funds that decided to sell off their positions entirely heading into Q3. It’s worth mentioning that Phill Gross and Robert Atchinson’s Adage Capital Management dropped the largest investment of the “upper crust” of funds monitored by Insider Monkey, comprising close to $22.4 million in stock, and Malcolm Fairbairn’s Ascend Capital was right behind this move, as the fund dropped about $8 million worth. These bearish behaviors are important to note, as total hedge fund interest dropped by 3 funds heading into Q3.

As you can see these stocks had an average of 33 hedge funds with bullish positions and the average amount invested in these stocks was $1017 million. That figure was $2695 million in LSXMK’s case. The Liberty SiriusXM Group (NASDAQ:LSXMA) is the most popular stock in this table. On the other hand Celanese Corporation (NYSE:CE) is the least popular one with only 26 bullish hedge fund positions. Compared to these stocks The Liberty SiriusXM Group (NASDAQ:LSXMK) is more popular among hedge funds. Our calculations showed that top 15 most popular stocks among hedge funds returned 19.7% through March 15th and outperformed the S&P 500 ETF (SPY) by 6.6 percentage points. Hedge funds were also right about betting on LSXMK, though not to the same extent, as the stock returned 13.14% and outperformed the market as well.