Is The Liberty Braves Group (BATRK) A Good Stock To Buy?

With the fourth-quarter round of 13F filings behind us it is time to take a look at the stocks in which some of the best money managers in the world preferred to invest or sell heading into the first quarter. One of these stocks was The Liberty Braves Group (NASDAQ:BATRK).

Is The Liberty Braves Group (NASDAQ:BATRK) ready to rally soon? Hedge funds are taking an optimistic view. The number of bullish hedge fund bets went up by 1 lately. Our calculations also showed that BATRK isn’t among the 30 most popular stocks among hedge funds. BATRK was in 27 hedge funds’ portfolios at the end of December. There were 26 hedge funds in our database with BATRK positions at the end of the previous quarter.

What does the smart money think about The Liberty Braves Group (NASDAQ:BATRK)?

At Q4’s end, a total of 27 of the hedge funds tracked by Insider Monkey held long positions in this stock, a change of 4% from one quarter earlier. By comparison, 22 hedge funds held shares or bullish call options in BATRK a year ago. With hedge funds’ sentiment swirling, there exists an “upper tier” of notable hedge fund managers who were boosting their stakes considerably (or already accumulated large positions). 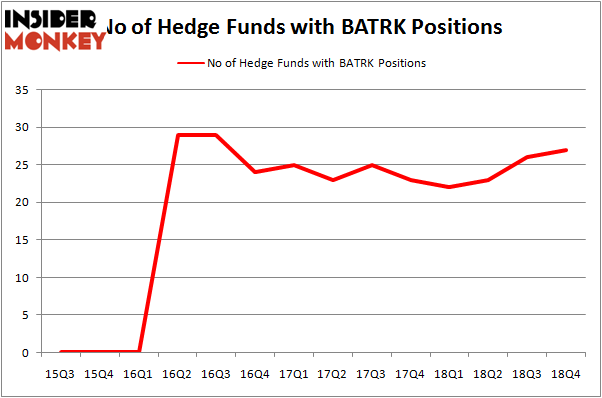 Of the funds tracked by Insider Monkey, Peter S. Park’s Park West Asset Management has the largest position in The Liberty Braves Group (NASDAQ:BATRK), worth close to $70.9 million, accounting for 3.5% of its total 13F portfolio. Coming in second is Mason Capital Management, managed by Kenneth Mario Garschina, which holds a $46.3 million position; the fund has 1.7% of its 13F portfolio invested in the stock. Some other hedge funds and institutional investors that are bullish comprise Douglas Dossey and Arthur Young’s Tensile Capital, Mario Gabelli’s GAMCO Investors and Adam Wolfberg and Steven Landry’s EastBay Asset Management.

With a general bullishness amongst the heavyweights, some big names were leading the bulls’ herd. One Fin Capital Management, managed by David MacKnight, created the most valuable position in The Liberty Braves Group (NASDAQ:BATRK). One Fin Capital Management had $8.2 million invested in the company at the end of the quarter. Parvinder Thiara’s Athanor Capital also made a $1.8 million investment in the stock during the quarter. The other funds with brand new BATRK positions are Jordan Moelis and Jeff Farroni’s Deep Field Asset Management, Israel Englander’s Millennium Management, and Brandon Haley’s Holocene Advisors.

As you can see these stocks had an average of 18.25 hedge funds with bullish positions and the average amount invested in these stocks was $226 million. That figure was $346 million in BATRK’s case. Contura Energy, Inc. (NYSE:CTRA) is the most popular stock in this table. On the other hand Cambrex Corporation (NYSE:CBM) is the least popular one with only 13 bullish hedge fund positions. The Liberty Braves Group (NASDAQ:BATRK) is not the most popular stock in this group but hedge fund interest is still above average. This is a slightly positive signal but we’d rather spend our time researching stocks that hedge funds are piling on. Our calculations showed that top 15 most popular stocks) among hedge funds returned 24.2% through April 22nd and outperformed the S&P 500 ETF (SPY) by more than 7 percentage points. Unfortunately BATRK wasn’t nearly as popular as these 15 stock and hedge funds that were betting on BATRK were disappointed as the stock returned 13.4% and underperformed the market. If you are interested in investing in large cap stocks with huge upside potential, you should check out the top 15 most popular stocks) among hedge funds as 13 of these stocks already outperformed the market this year.