Is The Howard Hughes Corporation (HHC) A Good Stock To Buy?

Is The Howard Hughes Corporation (NYSE:HHC) worth your attention right now? Money managers are buying. The number of long hedge fund bets moved up by 4 in recent months. Our calculations also showed that HHC isn’t among the 30 most popular stocks among hedge funds. HHC was in 26 hedge funds’ portfolios at the end of June. There were 22 hedge funds in our database with HHC positions at the end of the previous quarter.

In the financial world there are a large number of indicators market participants put to use to evaluate publicly traded companies. A pair of the most underrated indicators are hedge fund and insider trading interest. Our researchers have shown that, historically, those who follow the best picks of the elite money managers can trounce the S&P 500 by a healthy margin (see the details here).

Unlike some fund managers who are betting on Dow reaching 40000 in a year, our long-short investment strategy doesn’t rely on bull markets to deliver double digit returns. We only rely on hedge fund buy/sell signals. Let’s take a look at the key hedge fund action encompassing The Howard Hughes Corporation (NYSE:HHC). 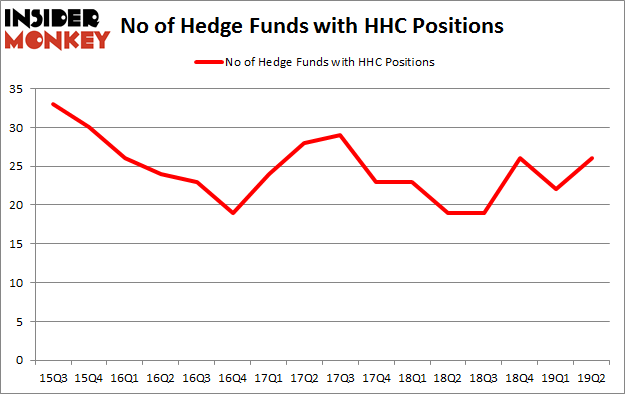 The largest stake in The Howard Hughes Corporation (NYSE:HHC) was held by Horizon Asset Management, which reported holding $207.3 million worth of stock at the end of March. It was followed by Pershing Square with a $148 million position. Other investors bullish on the company included Cardinal Capital, Pentwater Capital Management, and AEW Capital Management.

As you can see these stocks had an average of 25.25 hedge funds with bullish positions and the average amount invested in these stocks was $590 million. That figure was $551 million in HHC’s case. IAA, Inc. (NYSE:IAA) is the most popular stock in this table. On the other hand LATAM Airlines Group S.A. (NYSE:LTM) is the least popular one with only 5 bullish hedge fund positions. The Howard Hughes Corporation (NYSE:HHC) is not the most popular stock in this group but hedge fund interest is still above average. Our calculations showed that top 20 most popular stocks (view the video below) among hedge funds returned 24.4% in 2019 through September 30th and outperformed the S&P 500 ETF (SPY) by 4 percentage points. Hedge funds were also right about betting on HHC, though not to the same extent, as the stock returned 4.7% during the third quarter and outperformed the market as well.