Is The Gorman-Rupp Company (GRC) A Good Stock To Buy?

We know that hedge funds generate strong, risk-adjusted returns over the long run, therefore imitating the picks that they are collectively bullish on can be a profitable strategy for retail investors. With billions of dollars in assets, smart money investors have to conduct complex analyses, spend many resources and use tools that are not always available for the general crowd. This doesn’t mean that they don’t have occasional colossal losses; they do (like Peltz’s recent General Electric losses). However, it is still a good idea to keep an eye on hedge fund activity. With this in mind, as the current round of 13F filings has just ended, let’s examine the smart money sentiment towards The Gorman-Rupp Company (NYSEAMEX:GRC).

The Gorman-Rupp Company (NYSEAMEX:GRC) shares haven’t seen a lot of action during the second quarter. Overall, hedge fund sentiment was unchanged. The stock was in 7 hedge funds’ portfolios at the end of the second quarter of 2019. At the end of this article we will also compare GRC to other stocks including Seabridge Gold, Inc. (NYSE:SA), EDENOR S.A. (NYSE:EDN), and DHT Holdings Inc (NYSE:DHT) to get a better sense of its popularity. Our calculations also showed that GRC isn’t among the 30 most popular stocks among hedge funds (see the video below).

How are hedge funds trading The Gorman-Rupp Company (NYSEAMEX:GRC)?

At the end of the second quarter, a total of 7 of the hedge funds tracked by Insider Monkey were long this stock, a change of 0% from the first quarter of 2019. The graph below displays the number of hedge funds with bullish position in GRC over the last 16 quarters. With hedgies’ sentiment swirling, there exists an “upper tier” of key hedge fund managers who were increasing their holdings meaningfully (or already accumulated large positions). 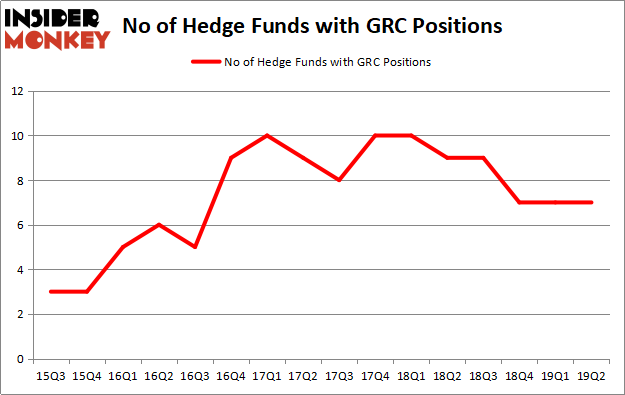 More specifically, GAMCO Investors was the largest shareholder of The Gorman-Rupp Company (NYSEAMEX:GRC), with a stake worth $19.1 million reported as of the end of March. Trailing GAMCO Investors was Royce & Associates, which amassed a stake valued at $10 million. Renaissance Technologies, AQR Capital Management, and Millennium Management were also very fond of the stock, giving the stock large weights in their portfolios.

We view hedge fund activity in the stock unfavorable, but in this case there was only a single hedge fund selling its entire position: D E Shaw. One hedge fund selling its entire position doesn’t always imply a bearish intent. Theoretically a hedge fund may decide to sell a promising position in order to invest the proceeds in a more promising idea. However, we don’t think this is the case in this case because only one of the 800+ hedge funds tracked by Insider Monkey identified as a viable investment and initiated a position in the stock (that fund was Zebra Capital Management).

As you can see these stocks had an average of 9.25 hedge funds with bullish positions and the average amount invested in these stocks was $41 million. That figure was $39 million in GRC’s case. DHT Holdings Inc (NYSE:DHT) is the most popular stock in this table. On the other hand EDENOR S.A. (NYSE:EDN) is the least popular one with only 4 bullish hedge fund positions. The Gorman-Rupp Company (NYSEAMEX:GRC) is not the least popular stock in this group but hedge fund interest is still below average. Our calculations showed that top 20 most popular stocks among hedge funds returned 24.4% in 2019 through September 30th and outperformed the S&P 500 ETF (SPY) by 4 percentage points. A small number of hedge funds were also right about betting on GRC as the stock returned 6.4% during the same time frame and outperformed the market by an even larger margin.