Is The Coca-Cola Company (KO) A Good Buy Now?

Even in economically depressed times, there are certain sectors that rarely feel the heat. In addition, there are some corporations so large and far-reaching that even if one of their products or service lines has a downturn, the overall company is savvy enough to be able to say, “Take a licking and keep on ticking.”

The largest companies offer reliable dividends. In addition, they offer stock price stability, which is ideal for conservative investors. Let’s look at The Coca-Cola Company (NYSE:KO), which provides a wide array of choices in sweeteners, package sizes and beverages. The Coca-Cola Company (NYSE:KO) has a long history of paying solid dividends with steady price appreciation. 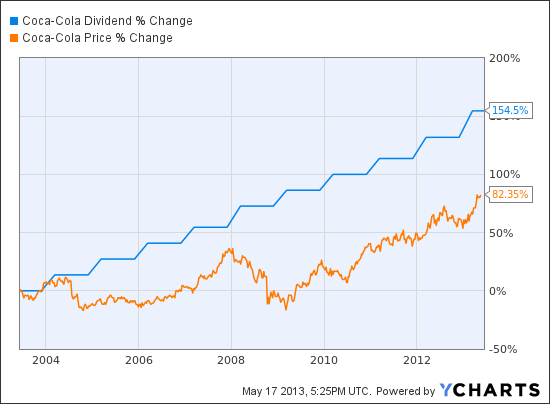 The Coca-Cola Company (NYSE:KO) has paid a quarterly dividend since 1920 and has increased dividends in each of the last 50 years. In the past 10 years, it has been able to increase its dividends by 154.5%. This is an incredible performance by any company in such a tough environment. In the last year alone, it has increased its dividend by 9.8%. At present, its payout ratio based on its dividend stands at 54.8%. The company has been able to sustain its payout at around 50% for the past 10 years.

Along with solid dividends, The Coca-Cola Company (NYSE:KO) has also been providing steady price appreciation. In the past 10 years, the company’s stock had shown increasing trends with few shortfalls. Its price has appreciated by 82.35% in the past 10 years. At present, the stock is trading at attractive multiples with 22.1 times earnings compared to the industry average of 45 times earnings. With a forward price-to-earnings ratio of 17.8, the stock has strong upside potential. Let’s dig into the company’s recent results to examine its ability to sustain returns.

The Coca-Cola Company (NYSE:KO) has been able to generate solid financial performances over the years. Recently, the company announced first-quarter 2013 results with 4% volume growth. Coca-Cola has been able to generate solid growth against the backdrop of a volatile global economy. With a vast revenue base, it has been consistently able to show solid top-line growth. In the past three years, its revenue growth on average stands at 15.7%. Additionally, it has solid margin on sales. In the trailing 12 months, its net margin stands at 18.2% when industry average stands at 12%.

At the end of first quarter, the company’s earnings stood at 46 cents a share. Coca-Cola is anticipating increasing its earnings by 9% over the next five years. To do this, it will shift its business model towards franchising. This means Coca-Cola is looking to generate its revenues as fees instead of from beverage sales. This move will enhance its margins and reduce its operational structure.

Along with consistent top-line growth, Coca-Cola has potential to generate hefty cash flows. Its operating and free cash flows are growing year over year. Its free cash flows are also providing cover for the dividend payments. In the trailing twelve months (ttm), its free cash flows were at $7.9 billion while dividends accounted for only $4.5 billion. Its financial health is also stable. This means the company can sustain increasing dividends as it is not under any solvency risks.