Is The Brink’s Company (BCO) Going to Burn These Hedge Funds?

Is The Brink’s Company (NYSE:BCO) a good investment right now? We check hedge fund and billionaire investor sentiment before delving into hours of research. Hedge funds spend millions of dollars on Ivy League graduates, expert networks, and get tips from industry insiders. They sometimes fail miserably but historically their consensus stock picks outperformed the market after adjusting for known risk factors.

The Brink’s Company (NYSE:BCO) investors should be aware of an increase in hedge fund sentiment recently. BCO was in 24 hedge funds’ portfolios at the end of September. There were 19 hedge funds in our database with BCO positions at the end of the previous quarter. Our calculations also showed that BCO isn’t among the 30 most popular stocks among hedge funds. 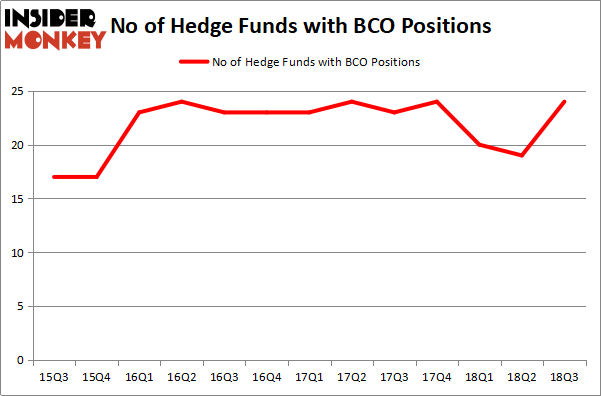 When looking at the institutional investors followed by Insider Monkey, P2 Capital Partners, managed by Claus Moller, holds the largest position in The Brink’s Company (NYSE:BCO). P2 Capital Partners has a $120.4 million position in the stock, comprising 10.8% of its 13F portfolio. Sitting at the No. 2 spot is Deccan Value Advisors, led by Vinit Bodas, holding a $92 million position; the fund has 6.8% of its 13F portfolio invested in the stock. Remaining members of the smart money with similar optimism contain Mitch Kuflik and Rob Sobel’s Brahman Capital, Matthew Sidman’s Three Bays Capital and Cliff Asness’s AQR Capital Management.

As you can see these stocks had an average of 17.25 hedge funds with bullish positions and the average amount invested in these stocks was $324 million. That figure was $537 million in BCO’s case. SM Energy Company (NYSE:SM) is the most popular stock in this table. On the other hand UMB Financial Corporation (NASDAQ:UMBF) is the least popular one with only 11 bullish hedge fund positions. The Brink’s Company (NYSE:BCO) is not the most popular stock in this group but hedge fund interest is still above average. This is a slightly positive signal but we’d rather spend our time researching stocks that hedge funds are piling on. In this regard SM might be a better candidate to consider a long position.