Is The Bank of Nova Scotia (BNS) A Good Stock To Buy?

Legendary investors such as Leon Cooperman and Seth Klarman earn enormous amounts of money for themselves and their investors by doing in-depth research on small-cap stocks that big brokerage houses don’t publish. Small cap stocks -especially when they are screened well- can generate substantial outperformance versus a boring index fund. That’s why we analyze the activity of those elite funds in these small-cap stocks. In the following paragraphs, we analyze The Bank of Nova Scotia (NYSE:BNS) from the perspective of those elite funds.

The Bank of Nova Scotia (NYSE:BNS) was in 11 hedge funds’ portfolios at the end of the third quarter of 2018. BNS has experienced a decrease in hedge fund sentiment recently. There were 14 hedge funds in our database with BNS holdings at the end of the previous quarter. Our calculations also showed that BNS isn’t among the 30 most popular stocks among hedge funds.

We’re going to take a peek at the recent hedge fund action encompassing The Bank of Nova Scotia (NYSE:BNS).

Hedge fund activity in The Bank of Nova Scotia (NYSE:BNS)

At Q3’s end, a total of 11 of the hedge funds tracked by Insider Monkey were bullish on this stock, a change of -21% from one quarter earlier. Below, you can check out the change in hedge fund sentiment towards BNS over the last 13 quarters. With hedge funds’ capital changing hands, there exists an “upper tier” of key hedge fund managers who were increasing their stakes substantially (or already accumulated large positions). 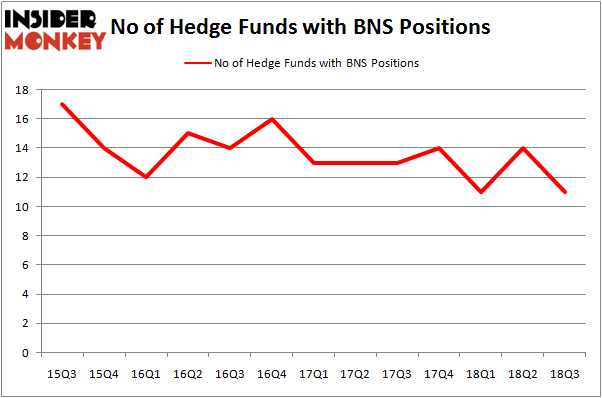 Among these funds, Arrowstreet Capital held the most valuable stake in The Bank of Nova Scotia (NYSE:BNS), which was worth $381.6 million at the end of the third quarter. On the second spot was Citadel Investment Group which amassed $178.6 million worth of shares. Moreover, Renaissance Technologies, AQR Capital Management, and Bridgewater Associates were also bullish on The Bank of Nova Scotia (NYSE:BNS), allocating a large percentage of their portfolios to this stock.

Since The Bank of Nova Scotia (NYSE:BNS) has witnessed a decline in interest from the smart money, we can see that there lies a certain “tier” of hedge funds that slashed their entire stakes in the third quarter. At the top of the heap, Alec Litowitz and Ross Laser’s Magnetar Capital dropped the largest investment of the 700 funds followed by Insider Monkey, valued at close to $0.9 million in stock, and Dmitry Balyasny’s Balyasny Asset Management was right behind this move, as the fund sold off about $0.4 million worth. These moves are important to note, as aggregate hedge fund interest fell by 3 funds in the third quarter.

Let’s check out hedge fund activity in other stocks – not necessarily in the same industry as The Bank of Nova Scotia (NYSE:BNS) but similarly valued. We will take a look at Walgreens Boots Alliance Inc (NASDAQ:WBA), Ambev SA (NYSE:ABEV), Anthem Inc (NYSE:ANTM), and Biogen Inc. (NASDAQ:BIIB). This group of stocks’ market caps are closest to BNS’s market cap.

As you can see these stocks had an average of 41.75 hedge funds with bullish positions and the average amount invested in these stocks was $2.82 billion. That figure was $875 million in BNS’s case. Anthem Inc (NYSE:ANTM) is the most popular stock in this table. On the other hand Ambev SA (NYSE:ABEV) is the least popular one with only 14 bullish hedge fund positions. Compared to these stocks The Bank of Nova Scotia (NYSE:BNS) is even less popular than ABEV. Considering that hedge funds aren’t fond of this stock in relation to other companies analyzed in this article, it may be a good idea to analyze it in detail and understand why the smart money isn’t behind this stock. This isn’t necessarily bad news. Although it is possible that hedge funds may think the stock is overpriced and view the stock as a short candidate, they may not be very familiar with the bullish thesis. In either case more research is warranted.