We know that hedge funds generate strong, risk-adjusted returns over the long run, therefore imitating the picks that they are collectively bullish on can be a profitable strategy for retail investors. With billions of dollars in assets, smart money investors have to conduct complex analyses, spend many resources and use tools that are not always available for the general crowd. This doesn’t mean that they don’t have occasional colossal losses; they do (like Peltz’s recent General Electric losses). However, it is still good idea to keep an eye on hedge fund activity. With this in mind, as the current round of 13F filings has just ended, let’s examine the smart money sentiment towards Teva Pharmaceutical Industries Limited (NYSE:TEVA).

Is Teva Pharmaceutical Industries Limited (NYSE:TEVA) a buy, sell, or hold? The best stock pickers are in an optimistic mood. The number of bullish hedge fund positions went up by 6 recently. Our calculations also showed that TEVA isn’t among the 30 most popular stocks among hedge funds. TEVA was in 36 hedge funds’ portfolios at the end of September. There were 30 hedge funds in our database with TEVA positions at the end of the previous quarter.

To most market participants, hedge funds are viewed as worthless, old financial tools of the past. While there are greater than 8,000 funds trading today, Our researchers choose to focus on the crème de la crème of this group, around 700 funds. These money managers oversee bulk of the hedge fund industry’s total asset base, and by shadowing their inimitable investments, Insider Monkey has come up with various investment strategies that have historically outrun Mr. Market. Insider Monkey’s flagship hedge fund strategy exceeded the S&P 500 index by 6 percentage points per year since its inception in May 2014 through early November 2018. We were able to generate large returns even by identifying short candidates. Our portfolio of short stocks lost 24% since February 2017 (through December 3rd) even though the market was up nearly 23% during the same period. We just shared a list of 11 short targets in our latest quarterly update.

At Q3’s end, a total of 36 of the hedge funds tracked by Insider Monkey held long positions in this stock, a change of 20% from the second quarter of 2018. On the other hand, there were a total of 34 hedge funds with a bullish position in TEVA at the beginning of this year. With hedgies’ sentiment swirling, there exists a select group of notable hedge fund managers who were boosting their holdings considerably (or already accumulated large positions). 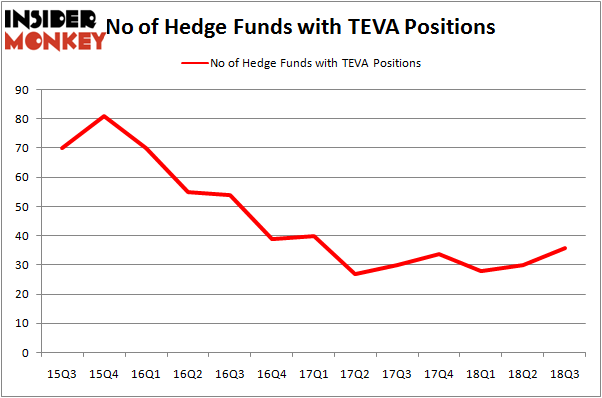 With a general bullishness amongst the heavyweights, some big names were leading the bulls’ herd. Orbis Investment Management, managed by William B. Gray, assembled the most valuable position in Teva Pharmaceutical Industries Limited (NYSE:TEVA). Orbis Investment Management had $45.1 million invested in the company at the end of the quarter. Robert B. Gillam’s McKinley Capital Management also initiated a $33.3 million position during the quarter. The following funds were also among the new TEVA investors: Peter Rathjens, Bruce Clarke and John Campbell’s Arrowstreet Capital, Thomas Bailard’s Bailard Inc, and Alec Litowitz and Ross Laser’s Magnetar Capital.

As you can see these stocks had an average of 30 hedge funds with bullish positions and the average amount invested in these stocks was $1.86 billion. That figure was $2.51 billion in TEVA’s case. Liberty Global Plc (NASDAQ:LBTYK) is the most popular stock in this table. On the other hand Ryanair Holdings plc (NASDAQ:RYAAY) is the least popular one with only 13 bullish hedge fund positions. Teva Pharmaceutical Industries Limited (NYSE:TEVA) is not the most popular stock in this group but hedge fund interest is still above average. This is a slightly positive signal but we’d rather spend our time researching stocks that hedge funds are piling on. In this regard LBTYK might be a better candidate to consider a long position.